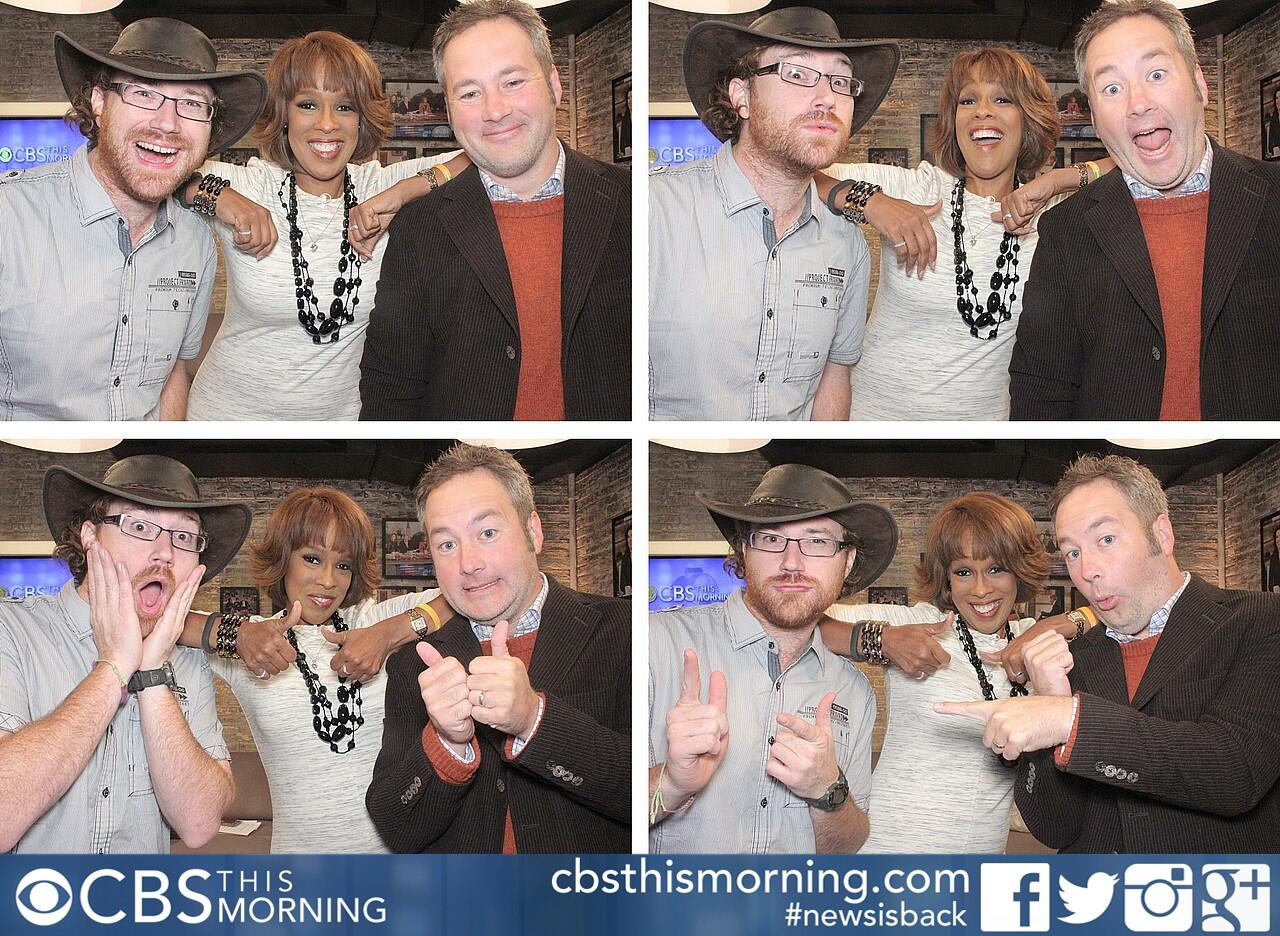 With consummate (freakish?) professionalism, I awoke 30 seconds before my alarm went off at 6.30am. After a quick shower and change of clothes, I made my blood sacrifices to Bacchus, jumped in the waiting limo and sped off towards the CBS Broadcast Centre. I was met at the door and taken up to the newsfloor. Now this is more like it! A nice big studio for me to run about. The warehouse-y interiors looked a bit like my old office in Liverpool. I was a bit disappointed to discover that the brickwork wasn’t real, but this is television, folks! IT’S ALL MADE OF MAGIC.

Nicole joined me in the Green Room, as did Gayle King (Oprah’s bessie mate) and fellow guest Chris Jones, a journo for Esquire Magazine who was here to talk about a piece he had just published detailing the events on Air Force One in the immediate aftermath of the Kennedy assassination.

I asked Chris what he thought of conspiracy theorists – he told me that he had purposefully not talked about the assassination itself in his article as he couldn’t cope with the tsunami of emails from every whackjob in the country that would no doubt ensue.

Chris actually recognised me from my One Second | Every Nation video, which is both cool and remarkable – three cheers for YouTube!!

The interview went really well! You can watch it here:

I was chuffed with meeting Charlie Rose – veteran anchor-man and star of this week’s (penultimate) episode of Breaking Bad.

After the interview I said my farewells to Charlie, Gayle and Nicole before heading off to Esquire Magazine HQ for an impromptu Q&A with Chris, the result of which you can read here: https://www.esquire.com/news-politics/news/a26621/around-the-world-without-a-plane/

So! I’ve done what I came for. I headed back to Oscar’s and we grabbed lunch together. I was being picked up at 4:30pm to be taken to the airport, but first I wanted to see the UN building – or, more specifically, the flags outside. (I’m a bit of a flag aficionado.)

But I forgot that it’s the week of the UN general assembly, so getting anywhere near the UN building was nigh-on impossible. Does the US have to pay for all this security? Or does Nauru chip in? We should be told!

So I headed back to Oscar’s, tail between my legs, picked up my trusty backpack (this trip marked the swansong of my trusty Lowe Alpine Pax 25 which had accompanied me on over 10 years and 200 countries of adventures) and was whisked away in a CBS limousine to JFK.

Before I knew it, I was hurtling through the air on my way back to dear old Blighty… but I wouldn’t be there long.