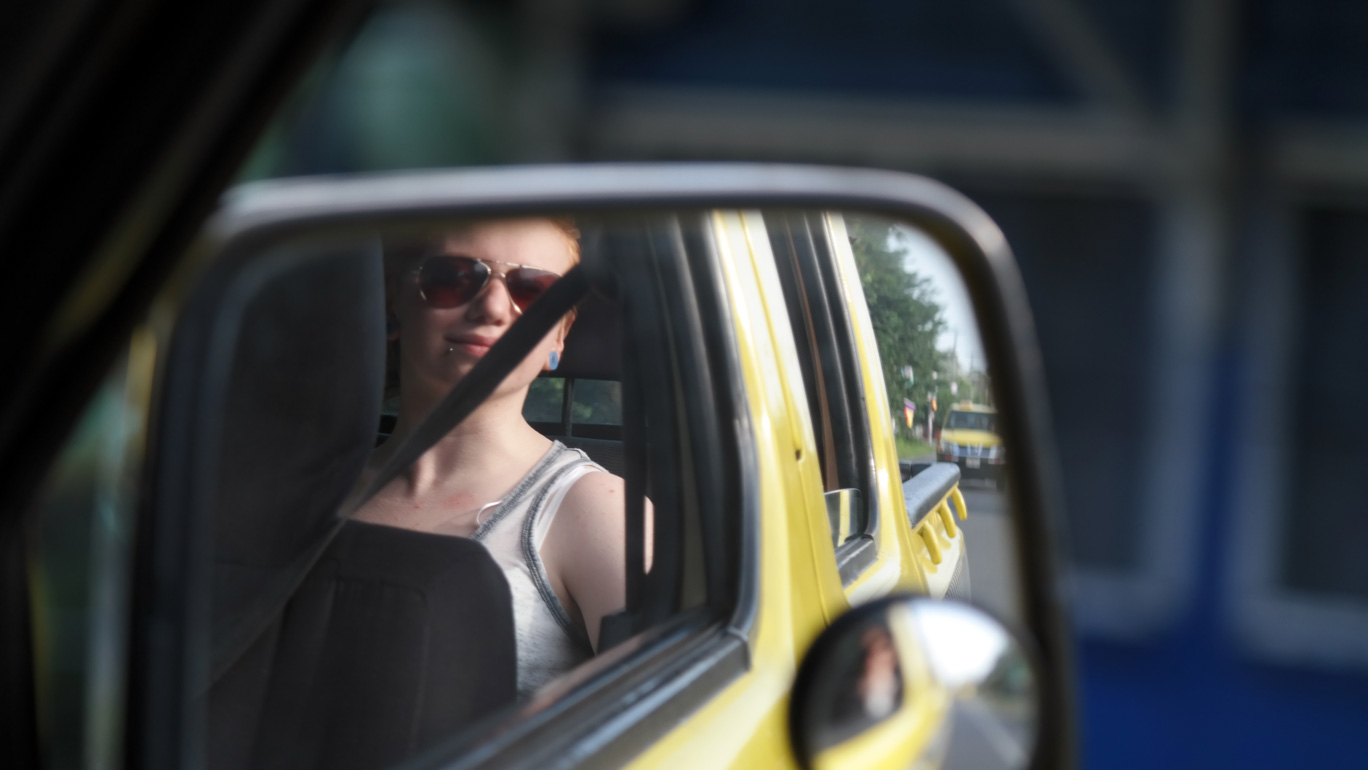 There are loads of buses throughout the day that take you to the bordertown of Sixaola, just 30 miles from Bocas Del Toro, Panama. But there’s only one that goes direct to Bocas Del Toro and it leaves at 10am.

Central American cities have this really annoying habit of having separate bus stations for each bus company, and each bus company has it’s own route monopoly. In South America, the bus companies are generally all lumped in together in one giant bus station. I know which system I prefer.

So, erring on the side of caution, Casey and I got to the bus station at 9.05am to find out that the bus to Bocas had already left… at 9am.

“No problemo”, thinks I – “a short taxi ride to the edge of town will see us catch the bus, after all – it’s only got a FIVE MINUTE head start… that’s nothing! Have you seen how the taxis drive around these parts??”

Unfortunately for us, we managed to get the one taxi driver who couldn’t (or wouldn’t) drive like a mental. Once we got to the city limits with Mr. Driving Miss Daisy behind the wheel, I came to the conclusion that the bus was loooooong gone. I saw that the fare was up to around 5,000 Colones, which is around $12, I (stupidly) thought well, it’s not really worth going all the way back and asked the driver to drop us off at the next town. My logic was that all the buses going to the Caribbean coast come this way out of San Jose, so we’d just hang around in the next town for something bus-shaped that would take us to Puerto Limon.

There was just one small flaw in my cunning plan.

Yep. It was bollocks.

The next town wasn’t for like 40 miles. Through a national park.

By the time I had fully comprehended the sheer stupidity of my sheer stupidity, we had past the point of no return and we had no choice but to press on… for another 30 miles.

Groan. Luckily, the driver was happy to take US dollars. Unlucky, he wanted a ridiculous amount of them, which was fair enough – he had just driven us halfway across Costa Rica.

So we got out at a rest-stop in the town of Santa Clara. It was only 20 minutes later that a bus to Puerto Limon arrived and whisked us off to the Caribbean coast. My wallet has still not forgiven me.

So we arrived at the bordertown of Sixaola around 4pm, feeling rather confident that we had in someway beaten the system, huge taxi fares notwithstanding.

But first, we had to cross Sixaola River… by walking over the rickety old rail bridge of Dooooooom!

It was only after our passports had been stamped into Panama that we realised while Costa Rica is GMT-6, Panama, being a former province of Colombia, is GMT-5. So it wasn’t 4.30pm. It was 5.30pm. And the last boat over to Bocas Town, where we were planning to stay the night, left at 6pm from Almirante. A town 30 miles away.

We jumped into a waiting minibus. Go go go!!!

Happily, our driver was either going to get us there on time or kill us all trying. We made it (as always by the skin of our teeth) and hopped on the last boat from Almirante over to Bocas Town. It gets dark around 6.30pm and the boats can’t travel in the dark, it’s too dangerous.

We found a cute little guesthouse called Casa Max, slung our backpacks and headed out into the night – no rush – Bocas Town will be our party town for the next year or so. We found a place with marvellously cheap drinks and watched one of them fire-twiddlers twiddle away into the night.

I Will Make it Legal

The Way To San Jose