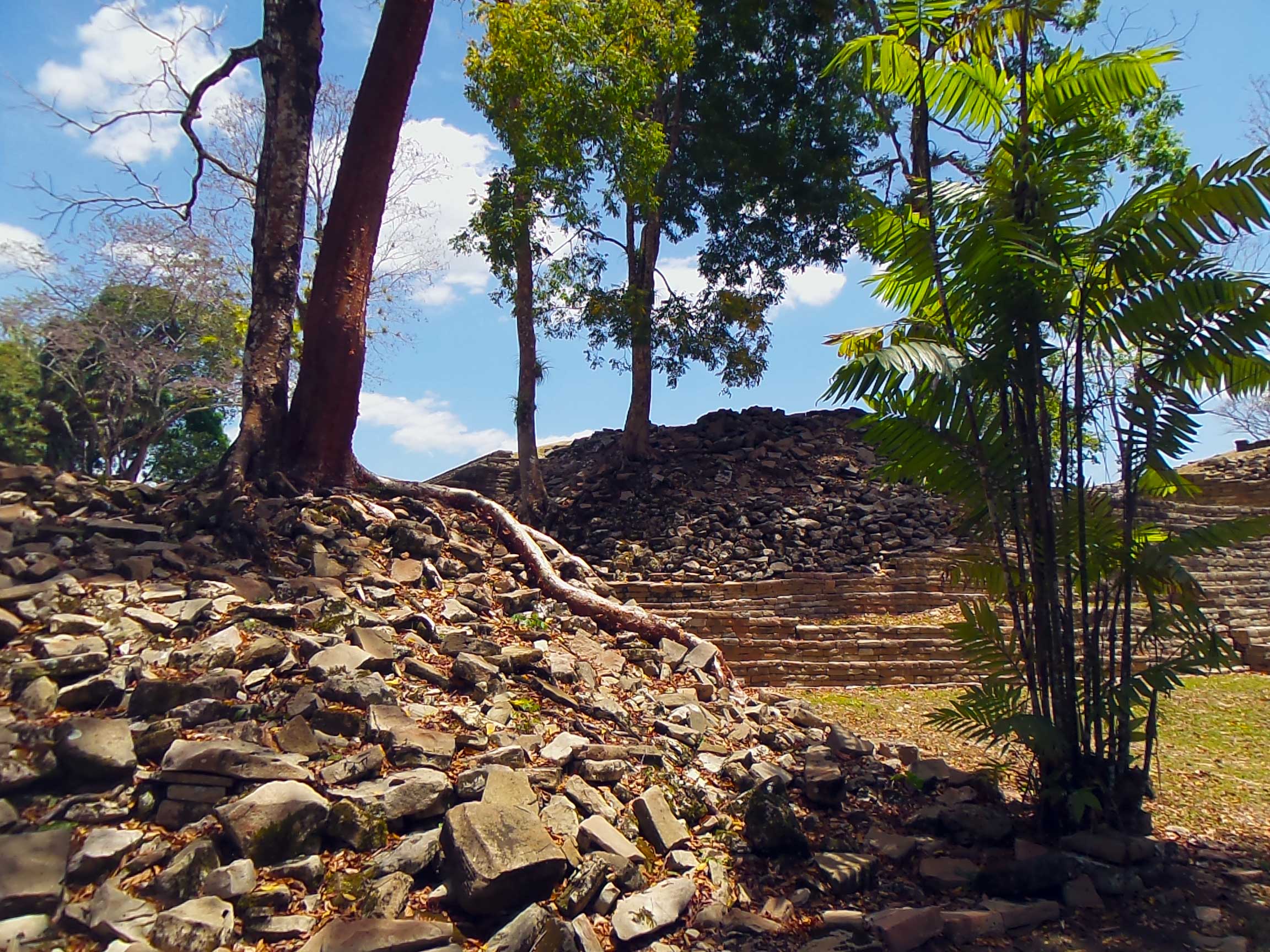 After a few days of sleeping on buses, border controls, passport stamps and terrible food, Casey and I arrived in the wonderfully ramshackle town of Punta Gorda in Belize.

I had wanted to stop at the Garifuna village of Livingston along the way and see if my old friend Wallander from The Odyssey Expedition was still knocking around, but we were late getting this show on the road, so we had to buzz past on our epic speedboat ride up the coast.

Punta Gorda was my one and only stop in Belize during The Odyssey Expedition – something I hoped to make up for on this trip. We stayed at the rather pleasant Nature’s Way Guest House. Along the way we passed a bunch of rather jovial US migrants drinking at a local bar – they invited us to join them, so we did. And that’s where we met the indomitable Jerry L Shaver, distributor of hilarious business cards.

After a beer or two, we went on a little explore. On the waterfront, we met Malcolm, a local kid who educated Casey and I about all the different shells we could find and the best places for fishing. This boy was more articulate and knowledgeable than most people twice his age – he’ll be President of Belize someday, you mark my words.

Later, as night fell, we headed south along the coast road until we found Asha’s Kitchen – a soul-food joint recommended to us by Jerry and his chums.

While we were eating, a HUGE storm broke. Wowsers it knows how to storm in The Caribbean.

After dinner Asha, the owner, gave us a lift back to our guest house in his car so we wouldn’t get soaked. Seriously starting to love love love Belize.

In the morning we’d be off to see the first site of the Ruta Maya: Lubaantun.

Take it away Wikipedia…!!

Lubaantun (also Lubaantún or Lubaantán in Spanish) is a pre-Columbian ruined city of the Maya civilization in southern Belize. One of the most distinguishing features of Lubaantun is the large collection of miniature ceramic objects found on site; these detailed constructs are thought to have been charmstones or ritual-accompanying accoutrements.

The city dates from the Maya Classic era, flourishing from the AD 730s to the 890s, and seems to have been completely abandoned soon after. The architecture is somewhat unusual from typical Classical central lowlands Maya sites. Lubaantun’s structures are mostly built of large stone blocks laid with no mortar, primarily black slate rather than the limestone typical of the region.

Several structures have distinctive “in-and-out masonry”; each tier is built with a batter, every second course projecting slightly beyond the course below it.

Corners of the step-pyramids are usually rounded, and lack stone structures atop the pyramids; presumably some had structures of perishable materials in ancient times.

The centre of the site is on a large artificially raised platform between two small rivers; it has often been noted that the situation is well-suited to military defence. The ancient name of the site is currently unknown; “Lubaantun” is a modern Maya name meaning “place of fallen stones”.
At the start of the 20th century inhabitants of various Kekchi and Mopan Maya villages in the area mentioned the large ruins to inhabitants of Punta Gorda. Dr. Thomas Gann came to investigate the site in 1903, and published two reports about the ruins in 1905. 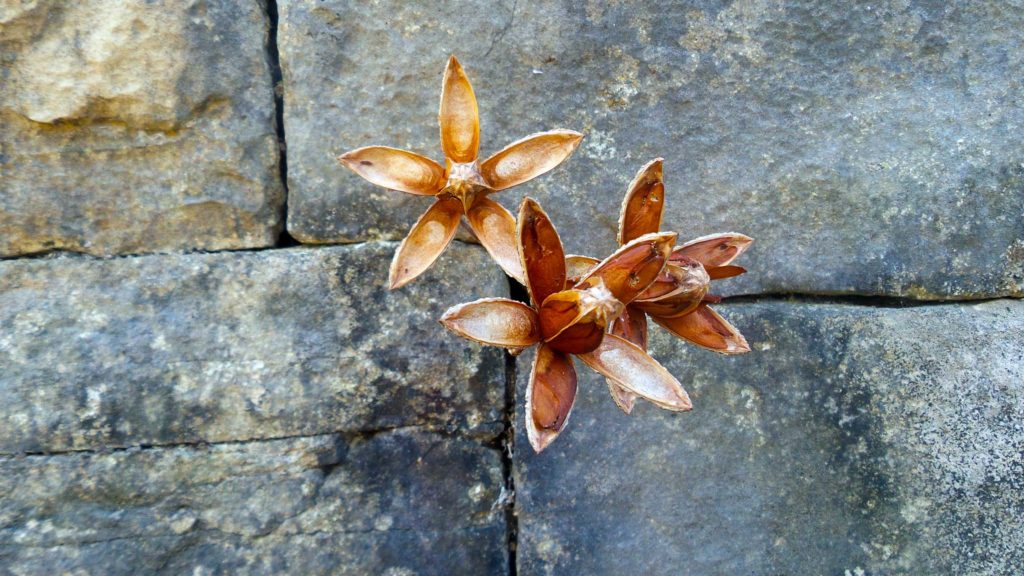 The next expedition was led by R. E. Merwin of Harvard University’s Peabody Museum in 1915 who cleared the site of vegetation, made a more detailed map, took measurements and photographs, and made minor excavations. Of note Merwin discovered one of the site’s three courts for playing the Mesoamerican ballgame, which had stone markers with hieroglyphic texts and depictions of the ballgame. 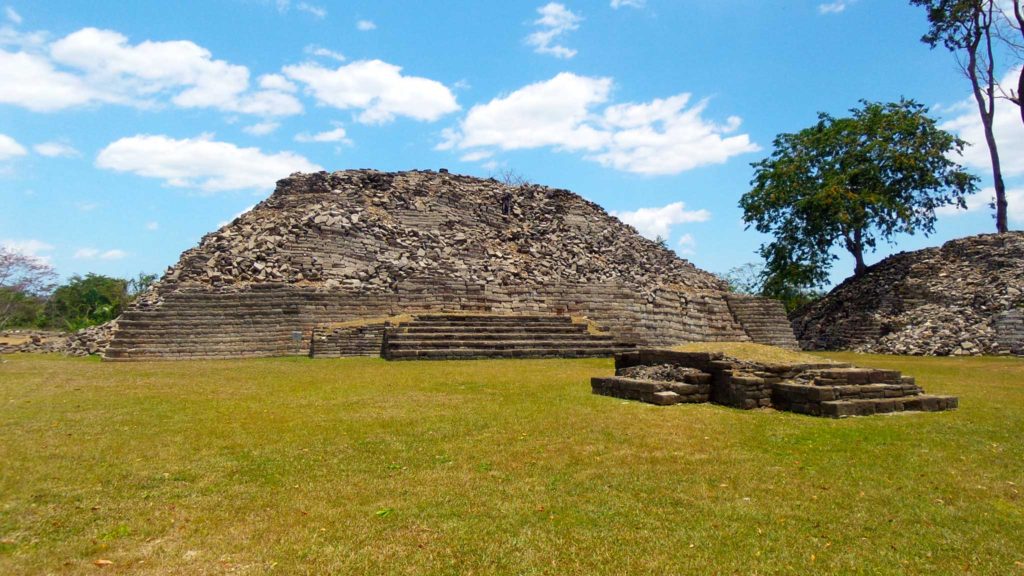 In 1924 Gann revisited the ruins, and then led adventurer F.A. Mitchell-Hedges to the site. In his typically sensationalistic fashion, Mitchell-Hedges published an article in the Illustrated London News claiming to have “discovered” the site.

Gann made a new map of the site. The following year Mitchell-Hedges returned to Lubaantun as a reporter for the Illustrated London News, accompanied by his companion Lady Richmond Brown. Anna Mitchell-Hedges, the adoptive daughter of F. A. Mitchell-Hedges, would later claim that she not only accompanied her father on the expedition, but also that it was she who found the (in)famous crystal skull there.

But there is no evidence that Anna was ever in Belize, and if the skull actually had been excavated at Lubaantun it would be hard to explain why none of the official reports mention it, why other expedition members deny that it was found there, and why the publicity-loving Mitchell-Hedges did not publish even a single mention of the skull before the 1950s. Possibly because it’s utter bollocks??

More importantly, it is clear from investigations by Joe Nickell and Norman Hammond that the skull was not found at Lubaantun at all, but was actually purchased by Mitchell-Hedges at a Sotheby’s auction in 1943. The skull had previously belonged to the collector Sydney Burney, and photographs of it had been published in the journal Man as early as 1936.

So the crystal skull thing turned out to be a big hoax. A bit like the Mayans predicting the end of the world on 21 December 2012. Which didn’t happen. Of course. The Mayans never thought it would. STOP BEING SILLY.

That didn’t stop George Lucas from making the travesty that was Indiana Jones and the Kingdom of the Crystal Skull. This was a man who also thought the Mayans lived in Southern Peru, four thousand kilometres south of here. That’s as far as Timbuktu is from London.

The British Museum sponsored investigations and excavations at Lubaantun under T.A. Joyce in 1926 and 1927, establishing the mid to late Classic period chronology of the site. Many of the artefacts from this expedition can be found in the British Museum’s collection.

After this Lubaantun was pretty much neglected by archaeologists (and suffered some looting by treasure hunters) until 1970, when a joint British Museum, Harvard, and Cambridge University project was begun led by archaeologist Norman Hammond, not to be confused with John Hammond, that was dinosaurs.

Getting back from the site wasn’t easy. We walked for about an hour along a dirt track in the blazing heat, then though the village of San Pedro Columbia. 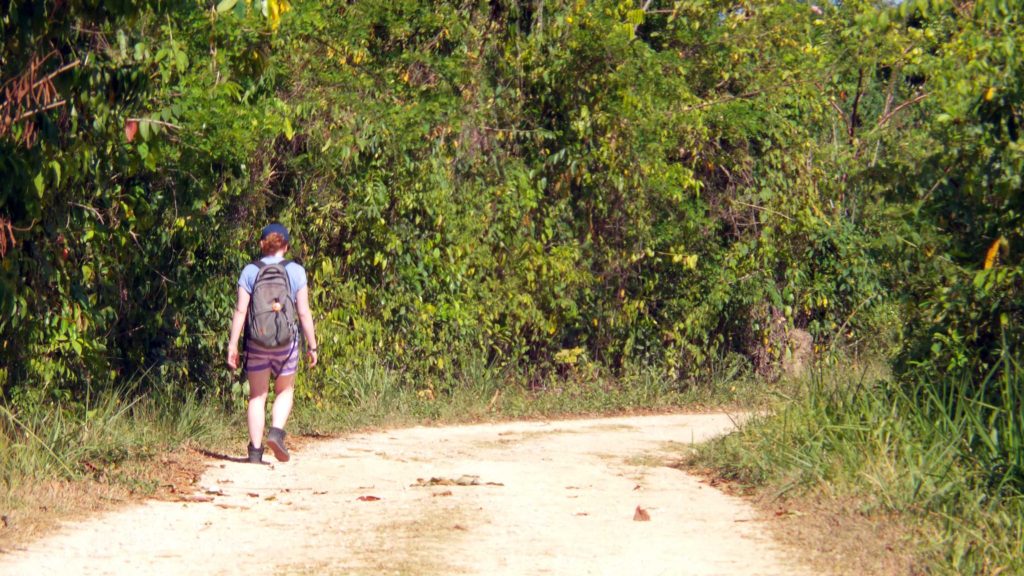 A local guy opened up his bar for us (the only one in town) while we waited for a school bus to take us back to Punta Gorda. I particularly liked the signs stencilled onto the wall.

That night Casey and I returned to Asha’s soul food place and once again stuffed our faces with the yummiest food this side of Mexico. The next day it would be up an’ atom for the  long school bus ride to Orange Walk in the north of the country.