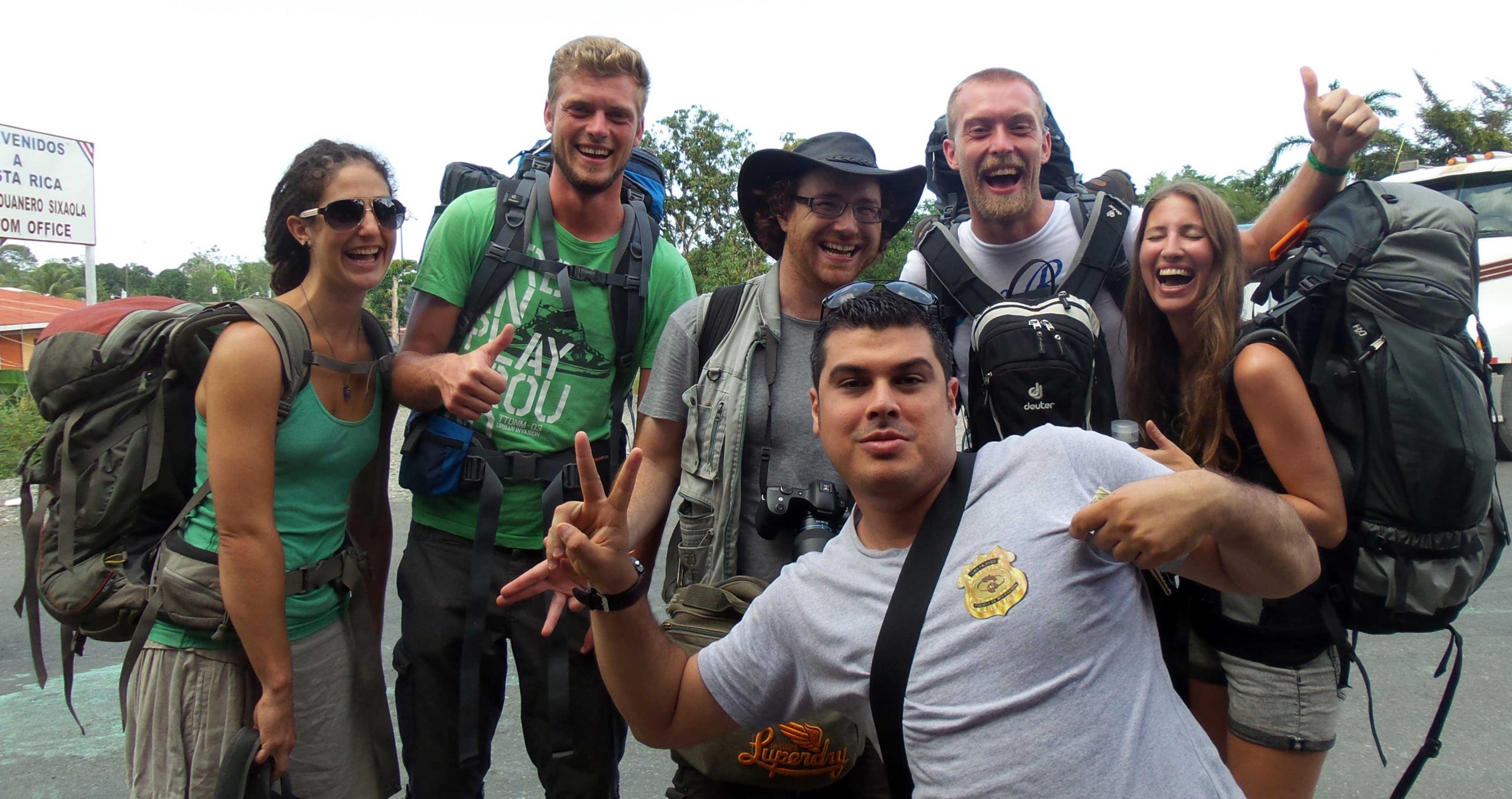 I don’t take over Jinja Island until May 1st, so Casey and I have a spare month to go and explore Central America, one of the areas I rushed through on the ol’ Odyssey Expedition. The plan is for us to race north and visit at least ten Mayan sites spread out over Belize, Mexico, Guatemala and Honduras. A journey we’re calling The Ruta Maya.

After a few days on the island we said our hasta la vistas to Ian and Vanessa for the moment and returned to Bocas Town, where we stayed for a week, chilling out, drinking and staying up far too late at the legendary Mundo Taito backpackers.

We learned the “three lies of Bocas”.

At the risk of becoming a cliché, we decided the time had come to get off our arses and hit the road! Those Mayan ruins ain’t going to see themselves.

Since we were on a shoestring budget (story of my life) we’d be travelling overland. That meant a boat ride to the mainland, then over the border to Costa Rica, San Jose up to Guatemala City and then onto Belize and the Yucatán peninsular.

We headed over to Taxi 25 and jumped on the next flying boat to Almirante.

Then it was a typically hair-raising minibus ride to the border with Costa Rica.

Crossing the rickety old bridge at the border was as hilarious as ever, but at least we weren’t trundling our suitcases over it this time. From now on it’s backpacks all the way!

On the Costa Rican side of the border a group of backpackers coming the other way recognised me from my YouTube channel.

I thought I had timed our border crossing really well, arriving at 1.55pm for the 2pm bus for San Jose… but I forgot that Costa Rica is an hour behind Panama (Panama still syncs up its timepieces with Bogota) – and so 2pm Costa Rica time wouldn’t be for another hour. Case and I grabbed a dreadful burger from a (tellingly) deserted cafe, but before long we were well on our way to the capital via Puerto Viejo, Puerto Limon and – yes – the Del Monte town of LIVERPOOL, Costa Rica!

We arrived in San Jose around 10pm and headed to a bar that would be open late, near the bus station. The bus up to Guatemala left at 3am. Madness I know. I think it’s something to do with the fact that buses don’t like driving at night.

We got online and went to the Tica bus site to book our tickets for tonight’s bus, but the website don’t wanna let you do that.

So I left Casey in the bar with our backpacks and walked the streets of Costa Rica’s capital, late on a Friday night, to the bus terminal.

As noted in an earlier blog entry, one of the most irritating things about travelling around Central America is that each bus company tends to have its own terminal.

I walked for ages, and I just couldn’t find the damn place. Bad map reading skills? Nope. It’s not 2009 anymore. My memory (and my Lonely Planet guidebook) was out of date. The station had moved to the other side of town. Only, San Jose doesn’t think much of road names either, so finding an address for the new place was nigh on impossible.

I decided to take a cab, hoping he’d know where it was, and luckily he did. I arrived, asked my cabbie to wait outside, queued for half an hour only to be told the 3am bus was sold out.

I returned to the pub to let Casey know what was going on, and then walked the street trying to find somewhere to stay the night. Nearly all the places marked in my 2008 Lonely Planet had either closed down, moved, or didn’t take guests after midnight.

In desperation, I checked us into Pangea Hostel, a former jail that I’ve heard nothing but bad things about. And I can happily say that they didn’t disappoint!

For thirty dollars, we slept in a dorm room (cell) on bunk beds. In the morning we drank our tiny cups of free coffee whilst having pop dance music BLASTED into our eardrums at 120dB. At 10am we had to not just check out but leave the premises entirely… or else stump up another $15 to stay for a few more hours.

To add insult to injury, the staff were surly as hell (except for one guy who was nice but tellingly utterly exasperated by it all) and seemed to have gone to the Basil Fawlty school of hospitality.

Bit grim eh?! But don’t just take my world for it, check out the reviews on Trip Advisor. Luckily, there’s a lovely little bar a few buildings down the same road that’s cheap, cheerful, has wi-fi, the food is grrrrreat and it’s open until 2am. We went straight from there to the Tica bus and at 3am, 24 hours later that scheduled, off we jolly well popped. Our bus would take us through Nicaragua and Honduras and into El Salvador, we’d stay there the following night and then be up early for the “connecting” bus to Guatemala City.

We arrived in San Salvador at around 2am and the connecting bus to Guatemala would be leaving at 5am. We imagined we’d just stay up, but the bus company had thought of that…! They gave us no choice but to stay in their crappy little hotel, so we wound up paying for an entire night even though we were only there for 3 hours.

So then onward to Guatemala City! We arrived around noon and took a taxi to the bus station for Puerto Barrios on the Caribbean coast… from whence we could take a boat to Punta Gorda, Belize. 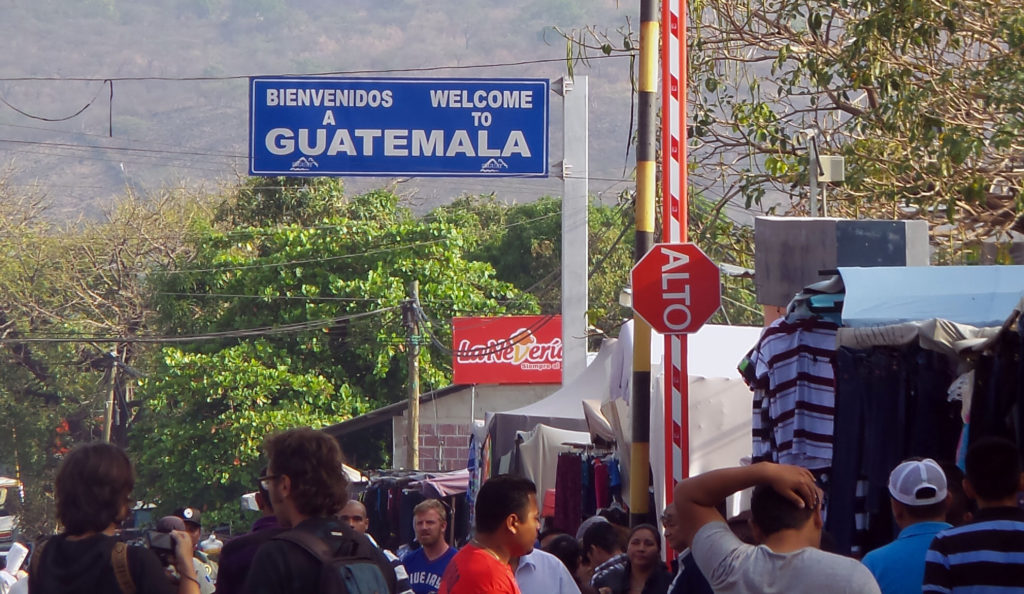 I managed to do this exact same journey much quicker on The Odyssey Expedition, five years earlier. On this trip we didn’t arrive in Puerto Barrios until nightfall and, typically, there were no ferryboats until the following morning.

So we checked into a sweet little guesthouse and found a great little café where they served giant plates of yummy scran.

In the morning we paid our ‘exit tax’ and were stamped out of Guatemala. If you’re wondering why we have to get a boat to Punta Gorda when Belize is like, attached to Guatemala, it’s because there’s no direct road. You can either take the ferry across the bay, which takes an hour, or drive for 10 hours via Belmopan.

And so onto the first speedboat of the morning… next stop… BELIZE!!!