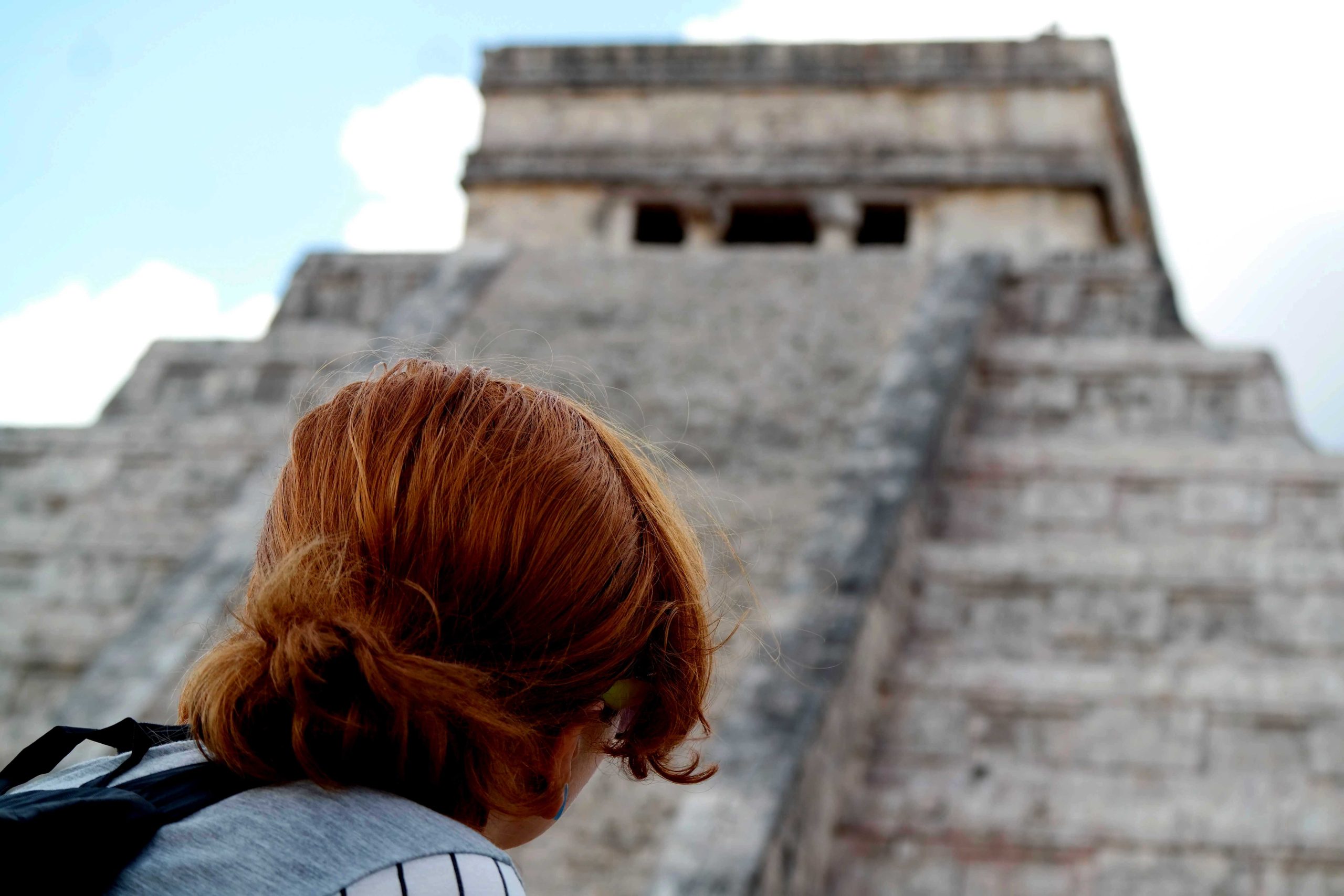 Another early morning and our third helping of Mayan awesomeness in three days. You may have heard of this place…

Chichén Itzá, from Yucatec Maya Chi’ch’èen Ìitsha’ means “at the mouth of the well of the Itza”. It was a large pre-Columbian city built by the Maya people of the Terminal Classic. The archaeological site is located in the municipality of Tinum, in the Mexican state of Yucatán.
Chichen Itza was a major focal point in the Northern Maya Lowlands from the Late Classic (c. AD 600–900) through the Terminal Classic (c. AD 800–900) and into the early portion of the Postclassic period (c. AD 900–1200). The site exhibits a multitude of architectural styles, reminiscent of styles seen in central Mexico and of the Puuc and Chenes styles of the Northern Maya lowlands.
The presence of central Mexican styles was once thought to have been representative of direct migration or even conquest from central Mexico, but most contemporary interpretations view the presence of these non-Maya styles more as the result of cultural diffusion.
Chichen Itza was one of the largest Maya cities and it was likely to have been one of the mythical great cities, or Tollans, referred to in later Mesoamerican literature. The city may have had the most diverse population in the Maya world, a factor that could have contributed to the variety of architectural styles at the site.
Evidence in the Chilam Balam books indicates another, earlier name for this city prior to the arrival of the Itza hegemony in northern Yucatán. While most sources agree the first word means seven, there is considerable debate as to the correct translation of the rest. This earlier name is difficult to define because of the absence of a single standard of orthography, but it is represented variously as Uuc Yabnal (“Seven Great House”), Uuc Hab Nal (“Seven Bushy Places”), Uucyabnal (“Seven Great Rulers”) or Uc Abnal (“Seven Lines of Abnal”). This name, dating to the Late Classic Period, is recorded both in the book of Chilam Balam de Chumayel and in hieroglyphic texts in the ruins.
Chichen Itza is located in the eastern portion of Yucatán state in Mexico. The northern Yucatán Peninsula is arid, and the rivers in the interior all run underground. There are two large, natural sink holes, called cenotes, that could have provided plentiful water year round at Chichen, making it attractive for settlement. Of the two cenotes, the “Cenote Sagrado” or Sacred Cenote (also variously known as the Sacred Well or Well of Sacrifice), is the most famous.
According to post-Conquest sources (Maya and Spanish), pre-Columbian Maya sacrificed objects and human beings into the cenote as a form of worship to the Maya rain god Chaac. Edward Herbert Thompson dredged the Cenote Sagrado from 1904 to 1910, and recovered artifacts of gold, jade, pottery and incense, as well as human remains. A study of human remains taken from the Cenote Sagrado found that they had wounds consistent with human sacrifice.
The core layout of the Chichen Itza site developed during its earlier phase of occupation, between 750 and 900 AD. Its final layout was developed after 900 AD, and the 10th century saw the rise of the city as a regional capital controlling the area from central Yucatán to the north coast, with its power extending down the east and west coasts of the peninsula. The earliest hieroglyphic date discovered at Chichen Itza is equivalent to 832 AD, while the last known date was recorded in the Osario temple in 998.
The Late Classic city was centered upon the area to the southwest of the Xtoloc cenote, with the main architecture represented by the substructures now underlying the Las Monjas and Observatorio and the basal platform upon which they were built.
Chichen Itza rose to regional prominence towards the end of the Early Classic period (roughly 600 AD). It was, however, towards the end of the Late Classic and into the early part of the Terminal Classic that the site became a major regional capital, centralizing and dominating political, sociocultural, economic, and ideological life in the northern Maya lowlands. The ascension of Chichen Itza roughly correlates with the decline and fragmentation of the major centers of the southern Maya lowlands.
According to Maya chronicles (e.g., the Book of Chilam Balam of Chumayel), Hunac Ceel, ruler of Mayapan, conquered Chichen Itza in the 13th century. Hunac Ceel supposedly prophesied his own rise to power. According to custom at the time, individuals thrown into the Cenote Sagrado were believed to have the power of prophecy if they survived. During one such ceremony, the chronicles state, there were no survivors, so Hunac Ceel leaped into the Cenote Sagrado, and when removed, prophesied his own ascension.

While there is some archaeological evidence that indicates Chichén Itzá was at one time looted and sacked, there appears to be greater evidence that it could not have been by Mayapan, at least not when Chichén Itzá was an active urban center. Archaeological data now indicates that Chichen Itza declined as a regional center by 1250 CE, before the rise of Mayapan. Ongoing research at the site of Mayapan may help resolve this chronological conundrum.

If you’re of “a certain age”, you might find the stone structures at the top of this temple’s stairway familiar…!

Along the south wall of the Temple of Warriors are a series of what are today exposed columns, although when the city was inhabited these would have supported an extensive roof system. The columns are in three distinct sections: a west group, that extends the lines of the front of the Temple of Warriors; a north group, which runs along the south wall of the Temple of Warriors and contains pillars with carvings of soldiers in bas-relief; and a northeast group, which apparently formed a small temple at the southeast corner of the Temple of Warriors, which contains a rectangular decorated with carvings of people or gods, as well as animals and serpents. The northeast column temple also covers a small marvel of engineering, a channel that funnels all the rainwater from the complex some 40 metres (130 ft) away to a rejollada, a former cenote.
To the south of the Group of a Thousand Columns is a group of three, smaller, interconnected buildings. The Temple of the Carved Columns is a small elegant building that consists of a front gallery with an inner corridor that leads to an altar with a Chac Mool. There are also numerous columns with rich, bas-relief carvings of some 40 personages. A section of the upper façade with a motif of x’s and o’s is displayed in front of the structure. The Temple of the Small Tables which is an unrestored mound. And the Thompson’s Temple (referred to in some sources as Palace of Ahau Balam Kauil ), a small building with two levels that has friezes depicting Jaguars (balam in Maya) as well as glyphs of the Maya god Kahuil.
The Osario itself, like El Castillo, is a step-pyramid temple dominating its platform, only on a smaller scale. Like its larger neighbor, it has four sides with staircases on each side. There is a temple on top, but unlike El Castillo, at the center is an opening into the pyramid which leads to a natural cave 12 metres (39 ft) below. Edward H. Thompson excavated this cave in the late 19th century, and because he found several skeletons and artifacts such as jade beads, he named the structure The High Priests’ Temple. Archaeologists today believe the structure was neither a tomb nor that the personages buried in it were priests.
The Temple of Xtoloc is a recently restored temple outside the Osario Platform is. It overlooks the other large cenote at Chichen Itza, named after the Maya word for iguana, “Xtoloc.” The temple contains a series of pilasters carved with images of people, as well as representations of plants, birds and mythological scenes.
Phew! We were there all day, and still didn’t get to see everything. The observatory would have to wait until next time. We were actually the last to leave, which enabled me to (somewhat cheekily) get this last shot of El Castillo before we were escorted out by security.
Outside we ran into some Mayan warriors who were desperate to get a picture with a famed adventurer such as I.

Back in Piste, Case and I grabbed something to eat and then hopped on the bus to our next destination on the Ruta Maya: the city of Merida!

There’s A Crack In Everything