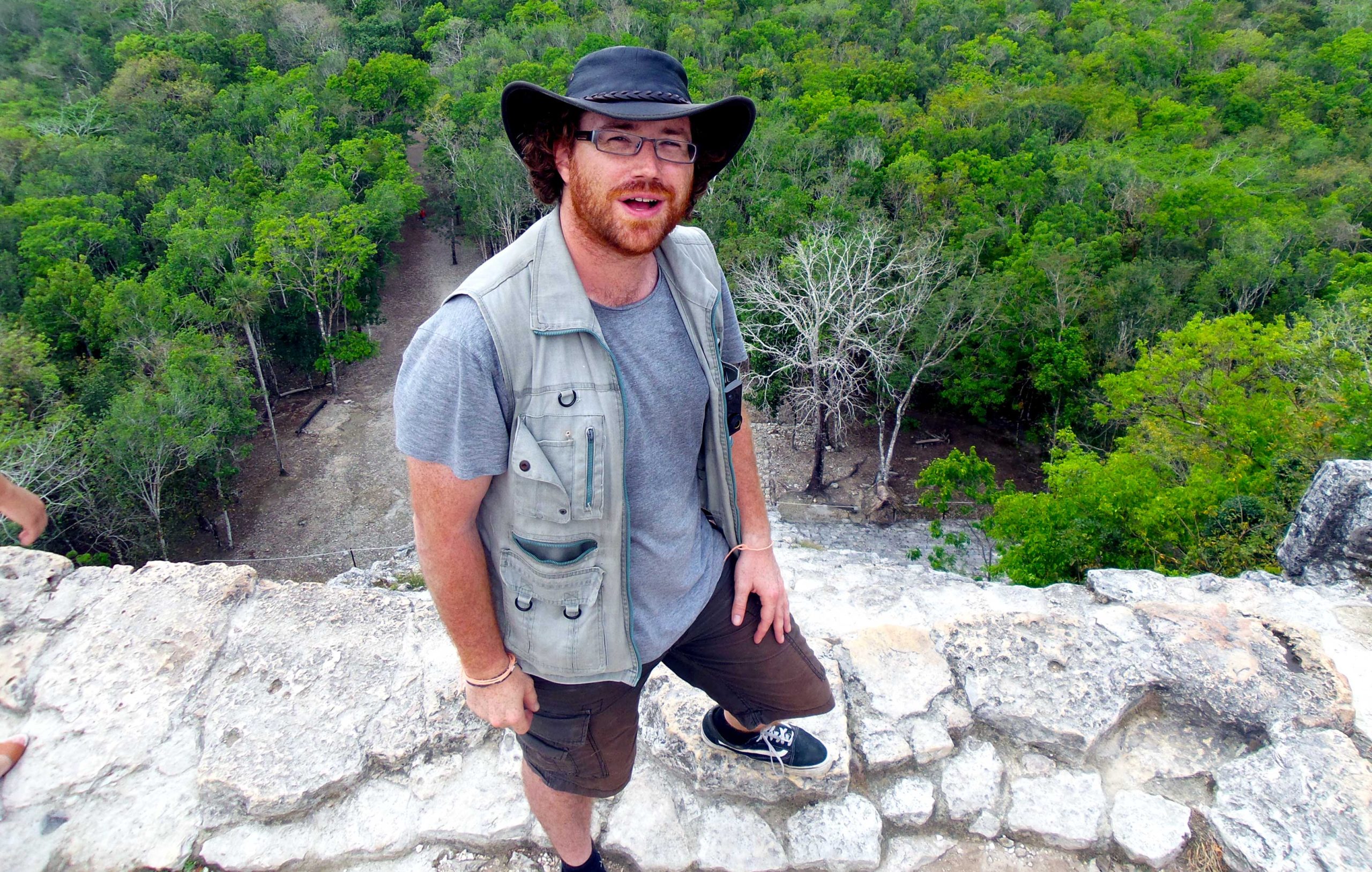 We arrived in the small town of Coba after nightfall. The town comprised of a boring old road and a rather splendid lake situated to the right of it. After a quick walking tour of the three available hotels, we settled in for the night.

The next day, bright and early, we walked to the Mayan ruins of Cobá.

Coba (Cobá in the Spanish language) is a large ruined city of the Pre-Columbian Maya civilization, located in the state of Quintana Roo, Mexico. It is located about 90 kilometres (56 mi) east of the Maya site of Chichen Itza and 44 kilometres (27 mi) northwest of the site of Tulum. 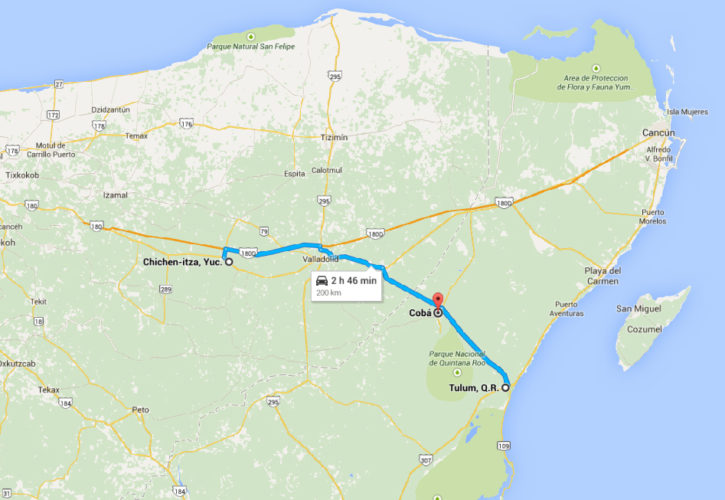 Coba is located around two lagoons. A series of elevated stone and plaster roads radiate from the central site to various smaller sites near and far. These are known by the Maya term sacbe (plural sacbeob). Some of these causeways go east, and the longest runs over 100 kilometres (62 mi) westwards to the site of Yaxuna. The site contains several large temple pyramids, the tallest, in what is known as the Nohoch Mul group of structures, being some 42 metres (138 ft) in height. Ixmoja is the tallest pyramid on the Yucatán peninsula. 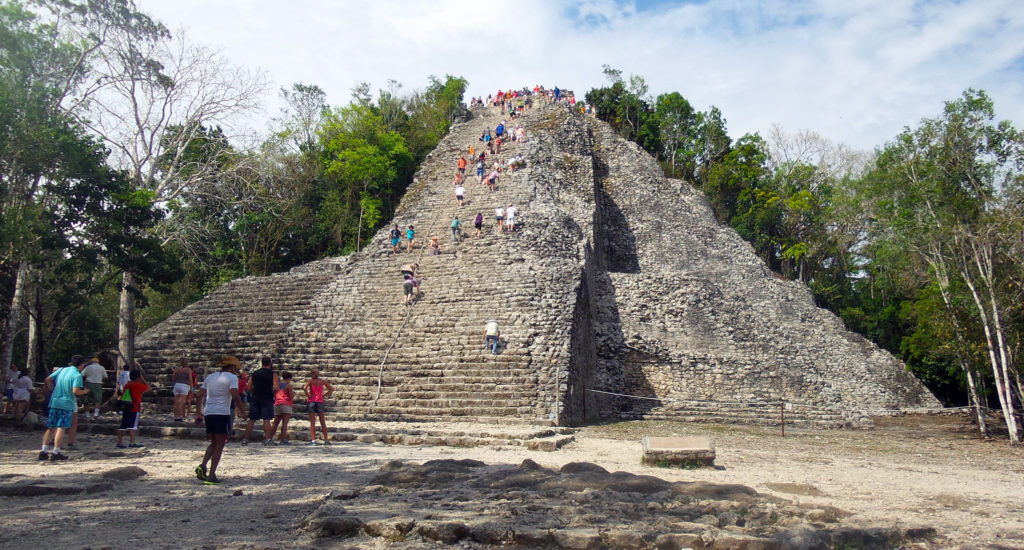 Coba is estimated to have had some 50,000 inhabitants (and possibly significantly more) at its peak of civilization, and the built up area extends over some 80 km². The site was occupied by a sizable agricultural population by the 1st century. The bulk of Coba’s major construction seems to have been made in the middle and late Classic period, about 500 to 900, with most of the dated hieroglyphic inscriptions from the 7th century. However Coba remained an important site in the Post-Classic era and new temples were built and old ones kept in repair until at least the 14th century, possibly as late as the arrival of the Spanish. 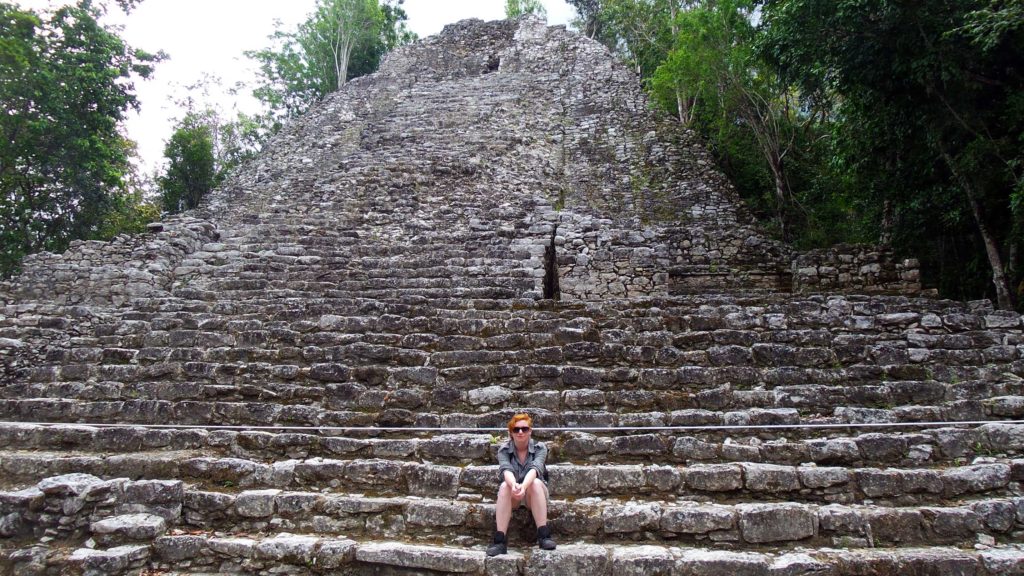 Archaeological evidence indicates that Cobá was first settled between 100 BC and 100 AD. At that time, there was a town with buildings of wood and palm fronts and flat platforms. The only archeological evidence of the time are fragments of pottery. After 100 AD, the area around Coba evidenced strong population growth, and with it an increase in its social and political status among Maya city states which would ultimately make Coba one of the biggest and most powerful city states in the northern Yucatán area. Between 200 and 600 AD, Coba must have dominated a vast area, including the north of the state of Quintana Roo and areas in the east of the state of Yucatán. 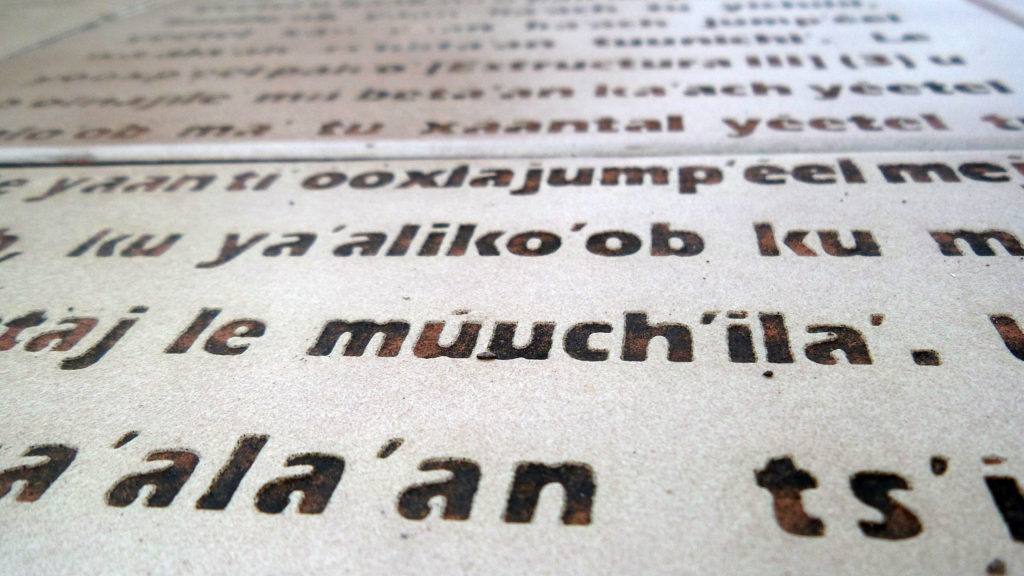 Coba must have maintained close contacts with the large city states of Guatemala and the south of Campeche like Tikal, Dzibanche or Calakmul. To maintain its influence, Coba must have established military alliances and arranged marriages among their elites. It is quite noteworthy that Coba shows traces of Teotihuacan architecture, like a platform in the Paintings group that was explored in 1999, which would attest of the existence of contacts with the central Mexican cultures and its powerful city of the early Classic epoch. Stelae uncovered at Coba are believed to depict that Coba had many female rulers. 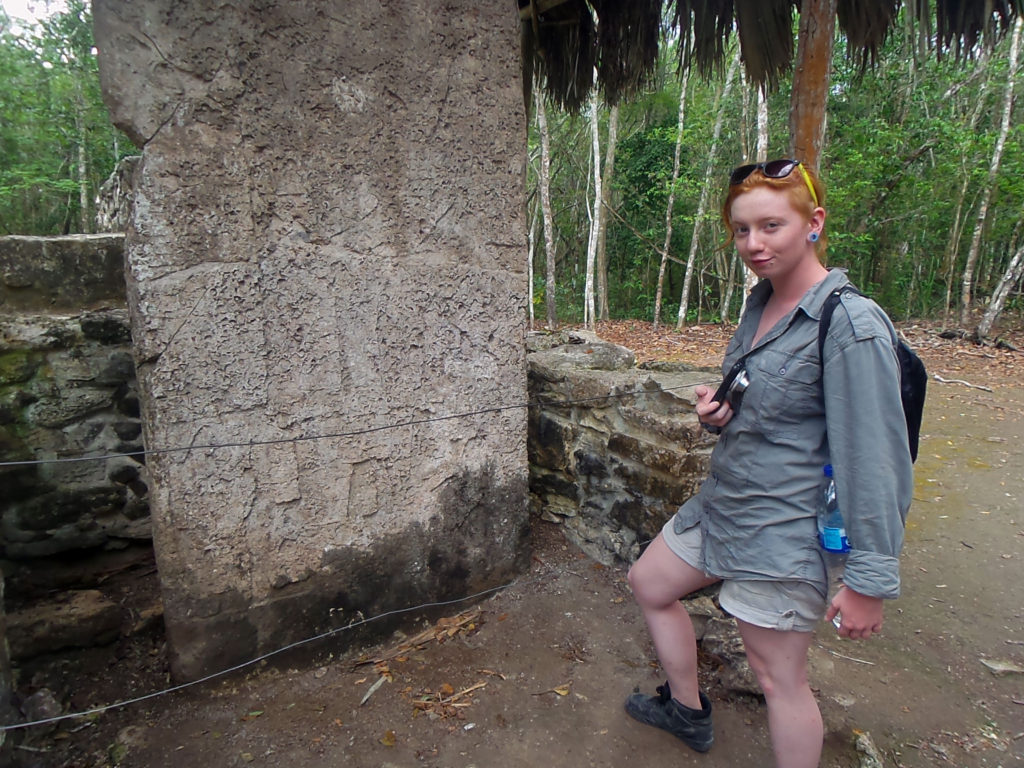 After 600 AD, the emergence of powerful city states of the Puuc culture and the emergence of Chichén Itzá altered the political spectrum in the Yucatán peninsula and began eroding the dominance of Coba. Beginning around 900 or 1000 AD, Coba must have begun a lengthy power struggle with Chichén Itzá, with the latter dominating at the end as it gained control of key cities such as Yaxuná. 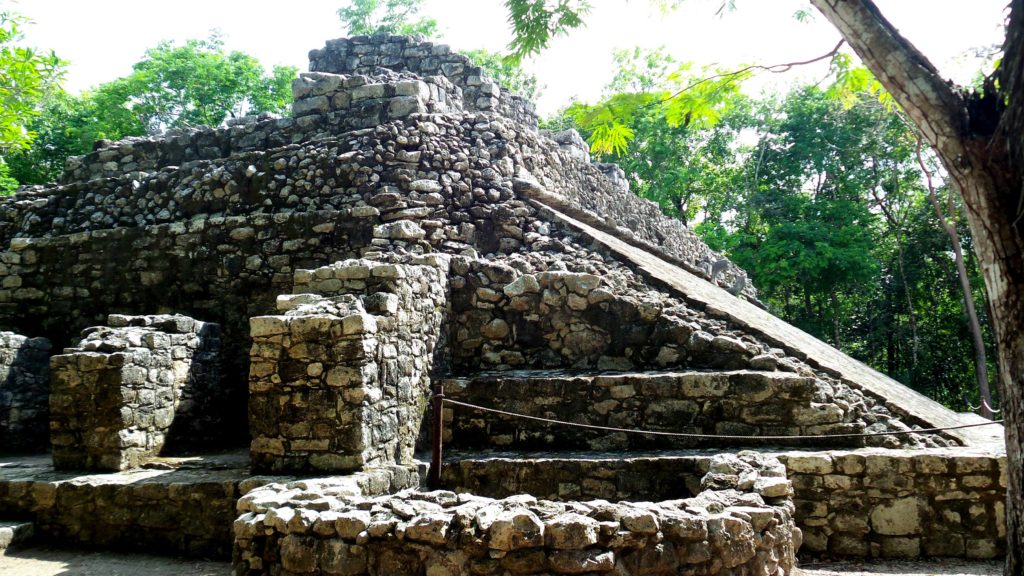 After 1000 AD, Coba lost much of its political weight among city states, although it maintained some symbolic and religious importance. This allowed it to maintain or recover some status, which is evidenced by the new buildings dating to the time 1200-1500 AD, now built in the typical Eastern coastal style. However, power centers and trading routes had moved to the coast, forcing cities like Coba into a secondary status, although somewhat more successful than its more ephemeral enemy Chichén Itzá. Coba was abandoned at the time the Spanish conquered the peninsula around 1550.
Knowledge of this expansive site was never completely lost, but it was not examined by scholars until the 1920s. John Lloyd Stephens mentioned hearing reports of the site in 1841, but it was so distant from any known modern road or village that he decided the difficulty in trying to get there was too daunting. For much of the rest of the 19th century the area could not be visited by outsiders due to the Caste War of Yucatán. Teoberto Maler paid Coba a short visit in 1893 and took at least one photograph, but unfortunately did not publish at the time and the site remained unknown to the archeological community.
Amateur explorer Dr. Thomas Gann was brought to the site by some local Maya hunters in February 1926. Gann published the first first-hand description of the ruins later the same year. Gann gave a short description to the archeologists of the Carnegie Institution project at Chichen Itza, which sent out an expedition under J. Eric S. Thompson. Thompson’s initial report of a surprisingly large site with many inscriptions prompted Sylvanus Morley to mount a more thorough examination of the site. 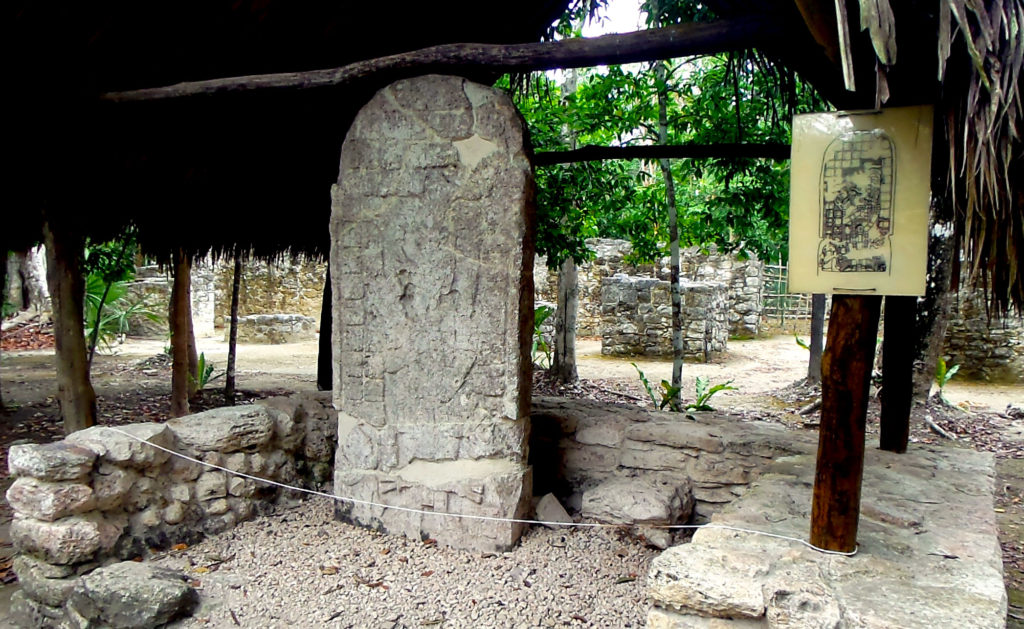 Eric Thompson made a number of return visits to the site through 1932, in which year he published a detailed description. Much of the site, including its road system was mapped in the mid 1970s (Folan). Some residences were excavated in the early 1980s (Benevides and Manzanilla).
The site remained little visited due to its remoteness until the first modern road was opened up to Coba in the early 1970s. As a major resort was planned for Cancún, it was realized that clearing and restoring some of the large site could make it an important tourist attraction. 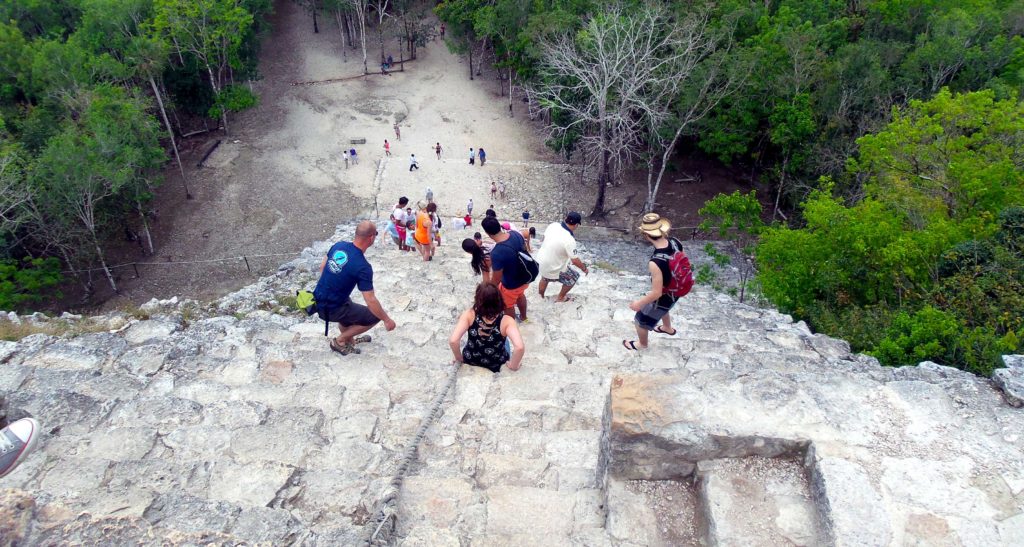 The Mexican National Institute of Anthropology & History began some archeological excavations in 1972 directed by Carlos Navarrete, and consolidated a couple of buildings. At the start of the 1980s another road to Coba was opened up and paved, and a regular bus service began.
Coba became a tourist destination shortly thereafter, with many visitors visiting the site on day trips from Cancún and the Riviera Maya. Only a small portion of the site has been cleared from the jungle and restored by archaeologists.

Well I hope you enjoyed your Wikipedia-curated tour of Coba. Is this really lazy of me? Probably. At least the pics are mine!

We left the the sprawling ruins of Coba in the afternoon and took the bus a couple of hours westward to a little place called Piste, next door to the world famous site of Chichén Itzá.

I decided that before going to Chichén Itzá, I wanted some Chicken Pizza. OBVS. However, Piste was a bit of an un-caballo town so we ended up going to the pub instead.

At the bar we got chatting with a local Mayan guy. Upon discovering we were British, he wanted to know if we knew Karl Pilkington.

“Not personally, but I love his travel show,” I said.

“Did you see the Idiot Abroad where he came to Mexico?” he asked.

“I showed him around my village. I’m Luis.”

What a small, wonderful world eh?