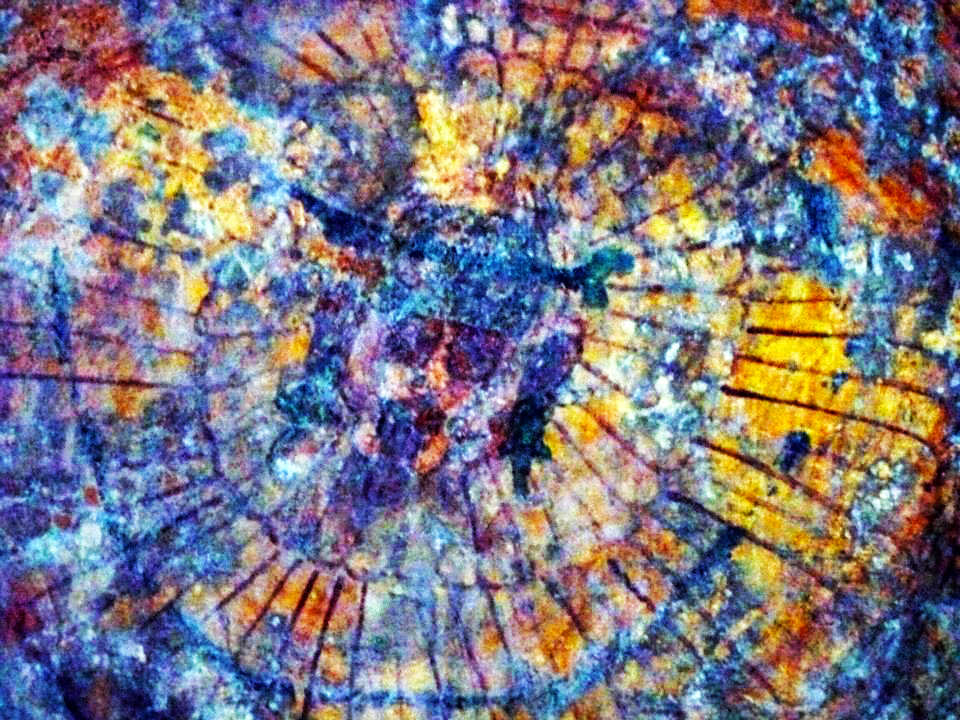 So the boat had left without us. No big deal – we’ll just hop on the next one. Err… yeah… easier said than done.

We waited an hour in the sweltering midday sun before another boat was ready to leave. We spoke with the driver, agreed to pay to get back to the town of Frontera Corozal, where our boat was supposed to take us. We took our seats and got ready to go.

And then some local lady who spoke a bit of English told us to get off the boat. Why? Because it was their boat and they didn’t want to take any passengers. I explained the situation – Case was clearly distressed, our bags were on the damn minibus and we were supposed to be leaving for Guatemala in the morning. I offered money, but she was having none of it. If the boat was full I would understand, but there were two empty f—ing seats right there!

And they remained empty as we watched the boat pull away.

It would be another half and hour before the next boat left. Most of the people on it were German and welcomed us on board – they didn’t even want money (although we still had to pay the driver). Thank God for the Germans eh? Grumpy Mexican ladies, not so much.

When we arrived back at Frontera Corozal, Case and I ran up the riverbank only to find the minibus – and our bags – had gone.

I asked around, nobody could help us.

The area around the dock had a carpark and a restaurant. I could see a white minibus by the exit gate, about 300 metres away. I ran over to it – hoping against hope that it was our bus.

The other people in the bus had been eating lunch. Then they had waited for us – we arrived not a moment too soon – they were just about to leave for Bonampak.

The driver, still irate from this morning, was done with us troublesome gringos. He wouldn’t even look me in the eye. Anyway, Bonampak.

Bonampak is an ancient Maya archaeological site in the Mexican state of Chiapas. The site is approximately 30 km (19 mi) south of the larger site of Yaxchilan, under which Bonampak was a dependency, and the border with Guatemala. While the site is not overly impressive in terms of spatial or architectural size, it is well known for a number of murals, most especially those located within Structure 1 (The Temple of the Murals). 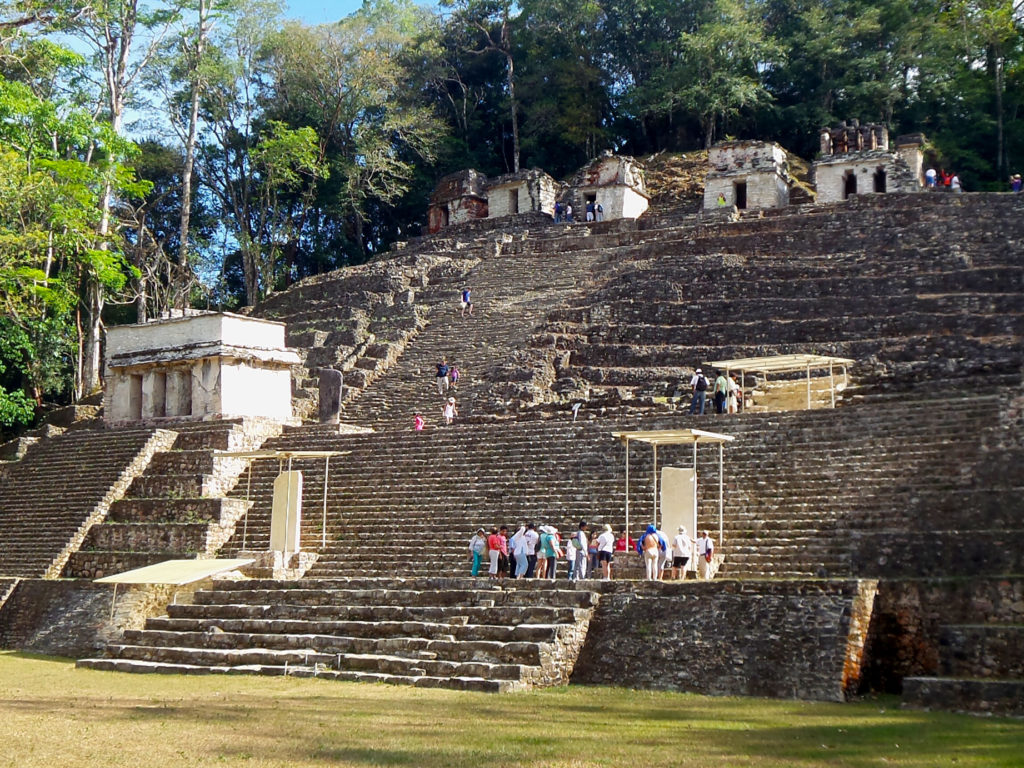 The construction of the site’s structures dates to the Late Classic period (c. AD 580 to 800). In addition to being amongst the most well-preserved Maya murals, the Bonampak murals are noteworthy for debunking early assumptions that the Maya were a peaceful culture of mystics, as the murals clearly depict war and human sacrifice. Take THAT hippies! 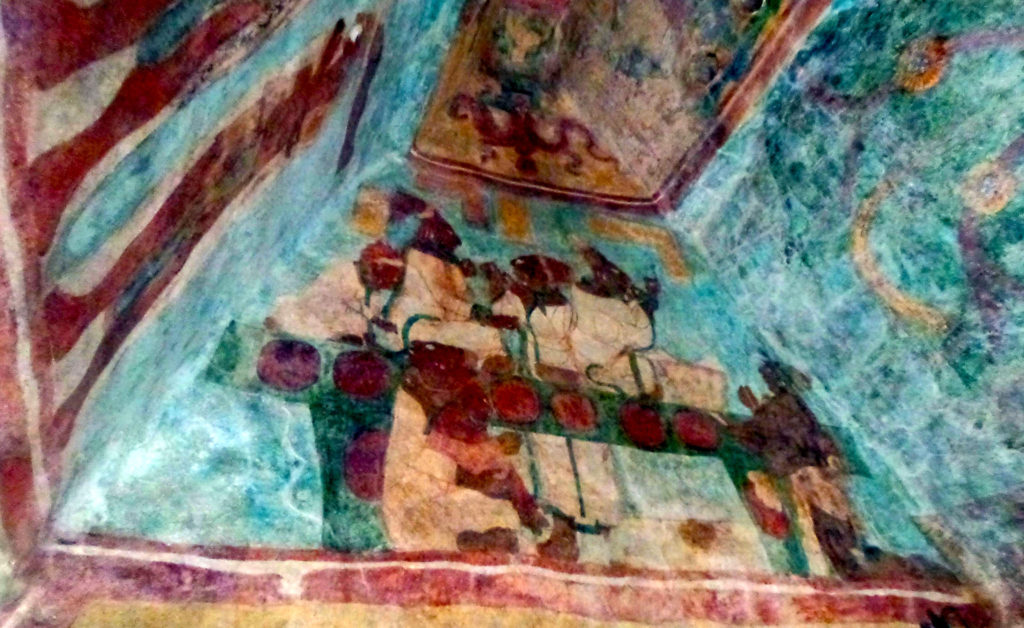 The site, lying close to a tributary of the Usumacinta River, was first seen by non-Mayans in 1946. Precisely who was first is a matter of speculation, but it was either by two American travellers, Herman Charles (Carlos) Frey and John Bourne, or photographer/explorer Giles Healey. The Americans were led to the ruins by the local Lacandon Maya who still visited the site to pray in the ancient temples. Giles Healey was the first to be shown the huge paintings covering the walls of one of the structure’s three rooms. The paintings show the story of a single battle and its victorious outcome. 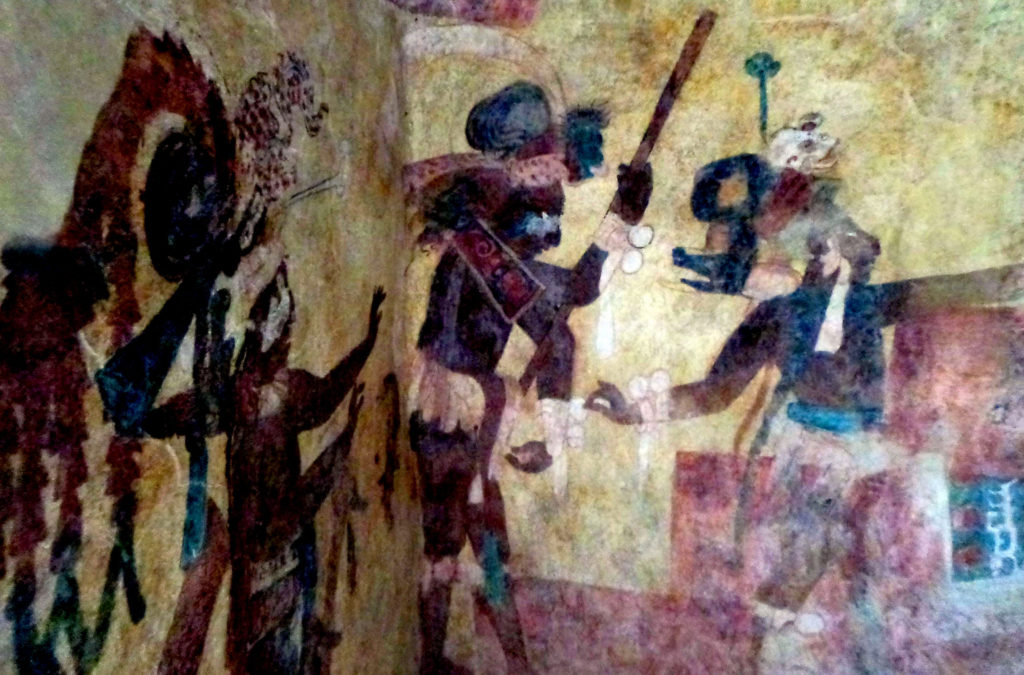 Bird Jaguar in the early 5th century fought against K’inich Tatb’u Skull I in Yaxchilan, and lost his freedom. Knot-eye Jaguar I was himself taken captive (by Ruler C of Piedras Negras), giving Bonampak some respite; but after 526, his successor K’inich Tatb’u Skull II attacked Bonampak again and captured more lords. 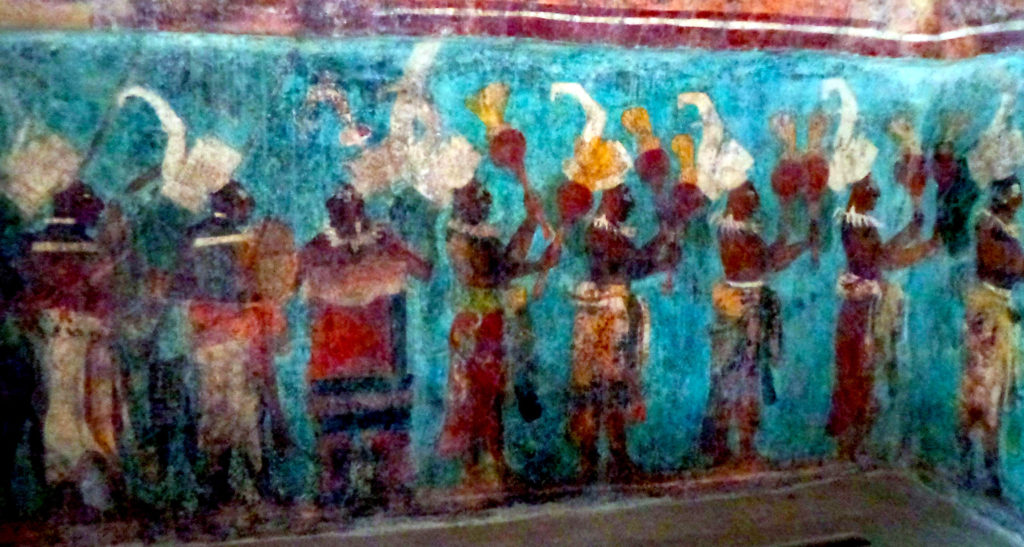 Bonampak by 600 CE had become a satellite of Yaxchilan. In that time, the ajaw of Yaxchilan installed Yajaw Chan Muwaan I as lord in Bonampak. Subsequent ajawob reconstructed the site to orient toward the metropolis. C. 790 CE, Yaxchilan’s king Shield Jaguar III oversaw the installation of Chan Muwaan II, and hired Yaxchilano artisans to commemorate it in “Structure I”‘s murals. Bonampak collapsed with Yaxchilan in the 9th century. 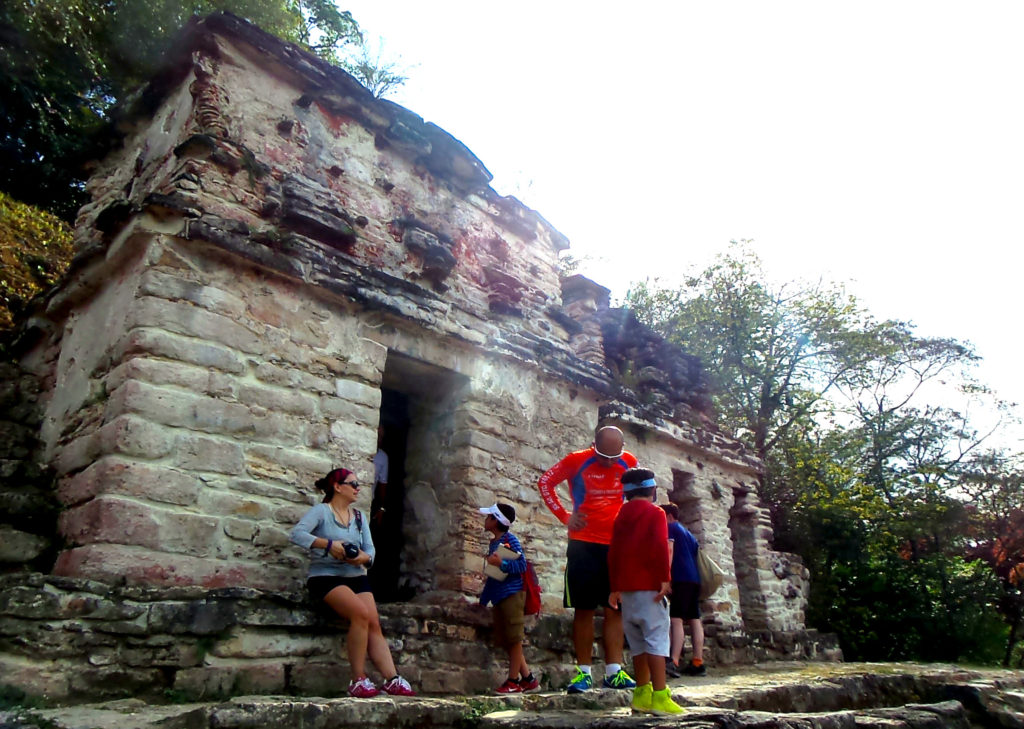 What is often referred to as The Temple of the Murals (Structure 1) is a long narrow building with 3 rooms atop a low-stepped pyramid base. The interior walls preserve the finest examples of classic Maya painting, otherwise known only from pottery and occasional small faded fragments. Through a fortunate accident, rainwater seeped into the plaster of the roof in such a way as to cover the interior walls with a layer of slightly transparent calcium carbonate. Shortly after Healy’s discovery the Carnegie Institution sent an expedition to Bonampak. The walls were painted with kerosene which made the layer over the paintings temporarily transparent, then the murals were extensively and completely photographed and duplicate paintings were made by two different artists. In 1996 a team from Yale University began The Bonampak Documentation Project, which included making an even more detailed study, photographic record, and reproductions of the murals. 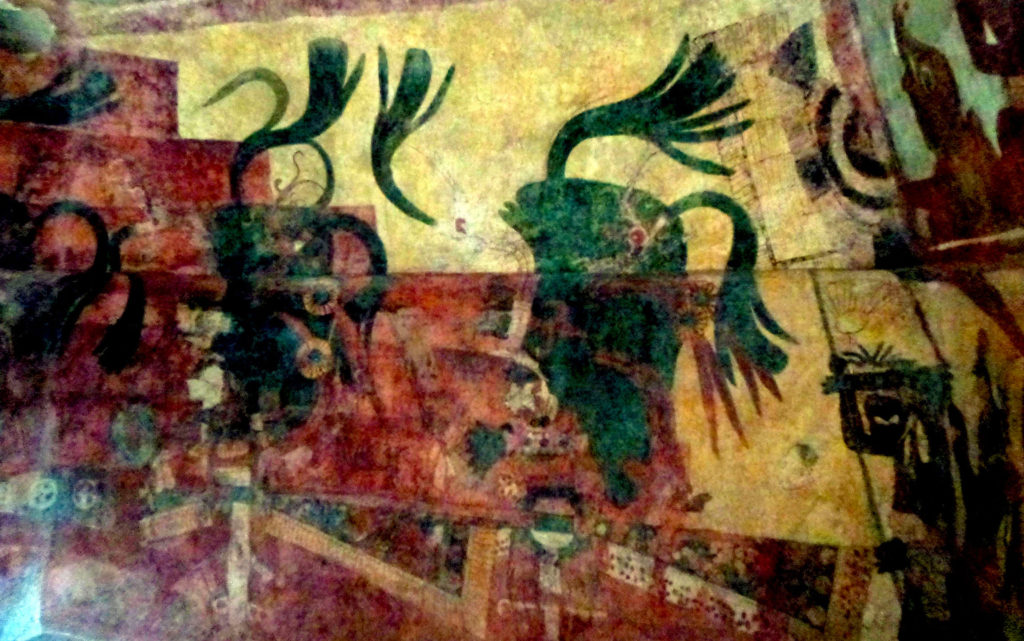 The paintings date from 790 and were made as frescos, with no seams in the plaster indicating that each room was painted in a single session during the short time that the plaster was moist. They show the hand of a master artist with a couple of competent assistants. The three rooms show a series of actual events with great realism. The first shows robing of priests and nobles, a ceremony to mark a child as a noble heir, an orchestra playing wooden trumpets, drums, and other instruments, and nobles conferring in discussion. 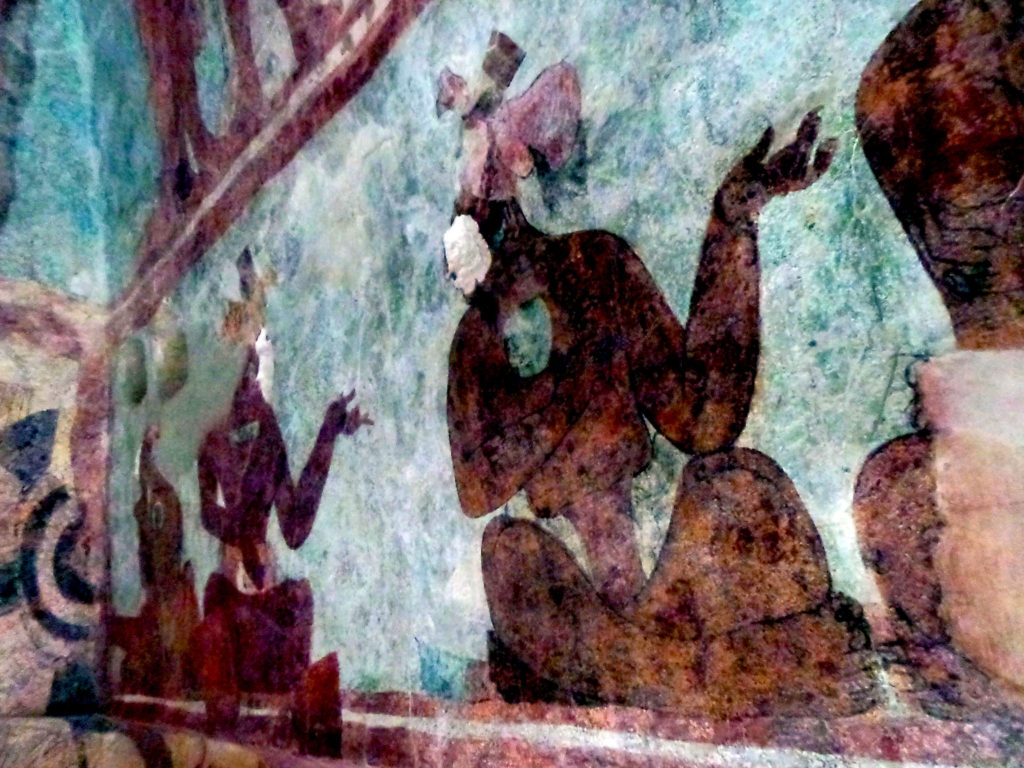 The second room shows a war scene, with prisoners taken, and then the prisoners, with ritually bleeding fingers, seated before a richly-attired Chaan Muwaan II, the Yaxchilano “governor” of Bonampak. It is usually presumed that the prisoners are being prepared for human sacrifice, though this is not actually shown in the murals. 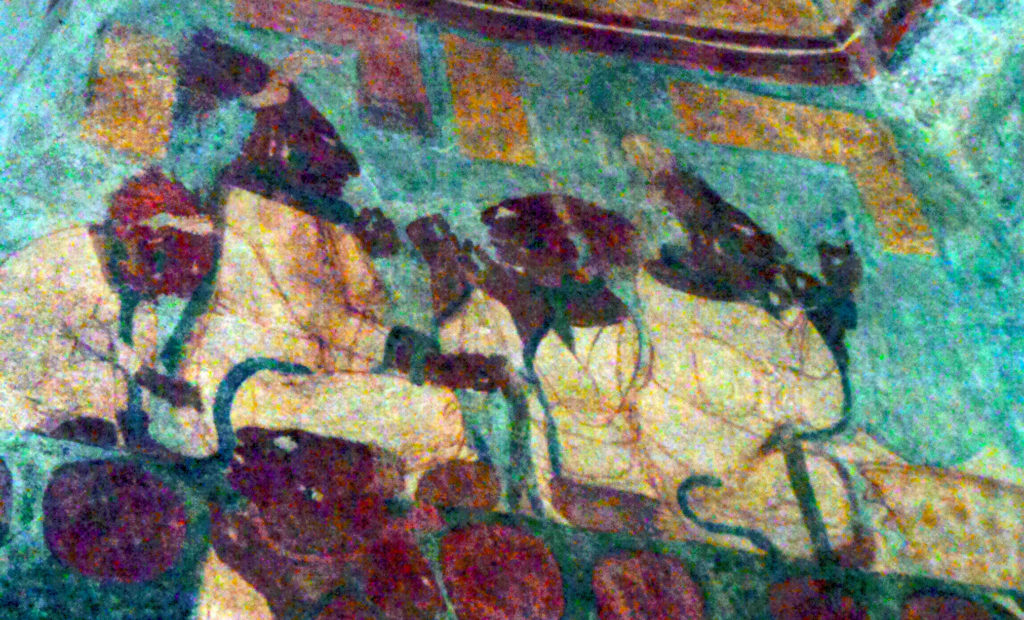 The third room shows a ceremony with dancers in fine costumes wearing masks of gods, and the ruler and his family stick needles into their tongues in ritual bloodletting. The accompanying hieroglyphic text dates the scene and gives the names of the principal participants. 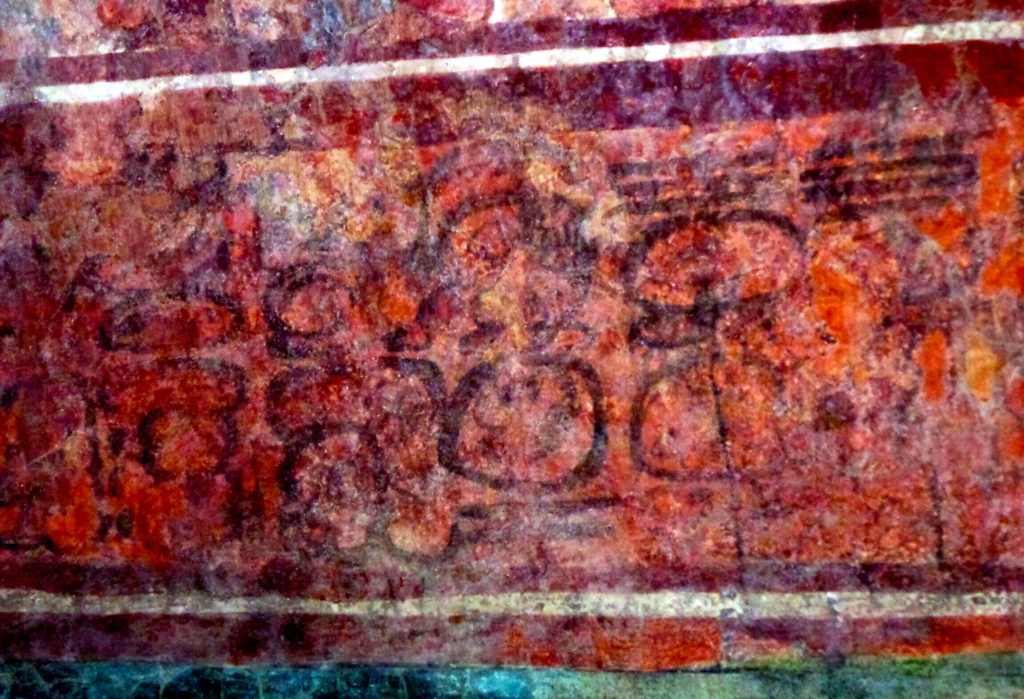 The fresco painting technique used in Bonampak is a three step process. An outline was made in red over a coat of stucco and then the flat spaces were filled with paints from mineral origins. These paints took on the colors of blue, red, sepia, yellow, mauve, purple and green. The last step was to outline the figures in black. The finished product was beautiful and well proportioned. Stylized figures representing gods, dragons and other mythological creatures were accompanied by planetary hieroglyphs and chronological inscriptions. 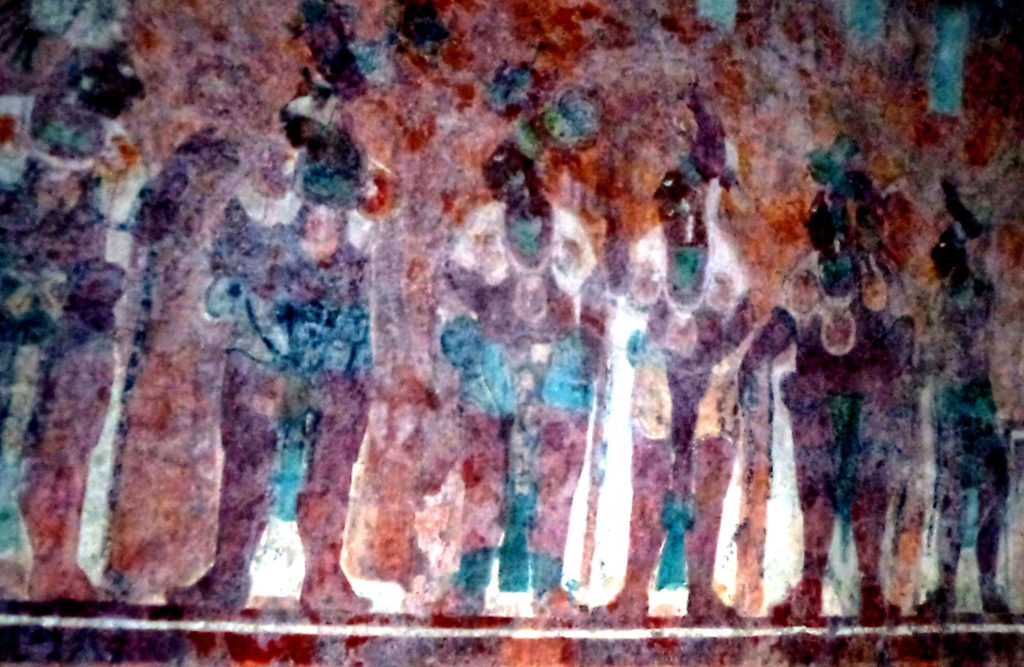 Professor Mary Miller of Yale, who conducted an extensive study of the murals, wrote “Perhaps no single artifact from the ancient New World offers as complex a view of Prehispanic society as do the Bonampak paintings. No other work features so many Maya engaged in the life of the court and rendered in such great detail, making the Bonampak murals an unparalleled resource for understanding ancient society.” 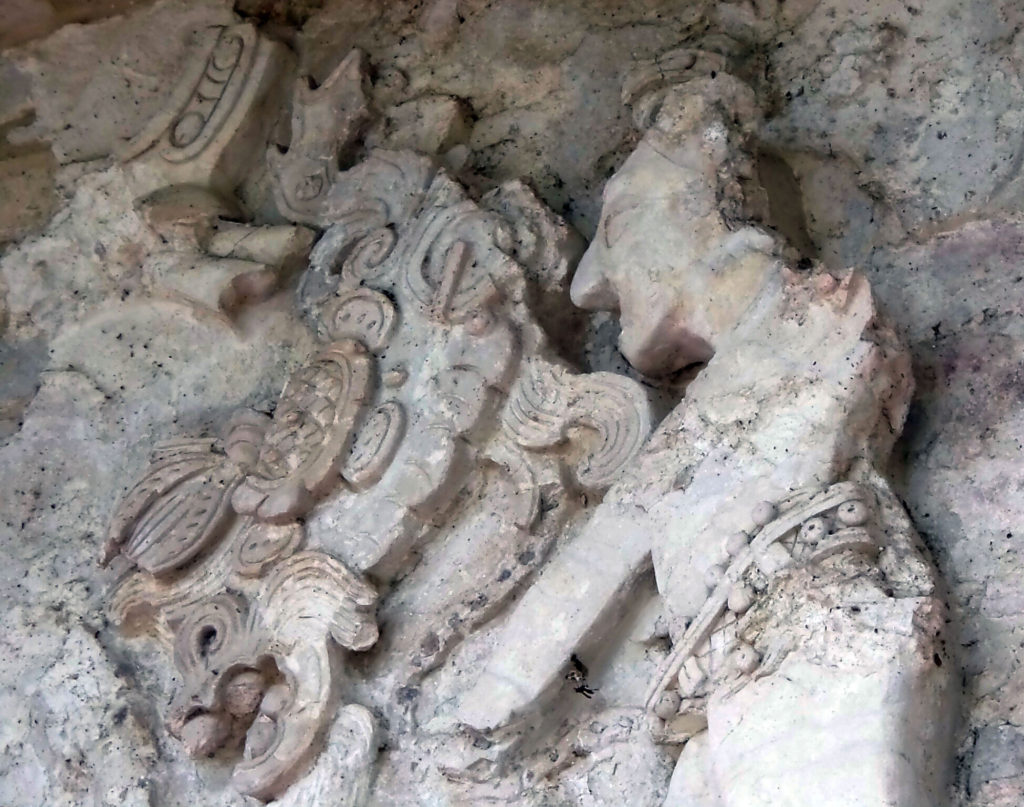 The frescos are situated about halfway up Temple I, so after taking our snaps (all without flash, by the way) we thought we’d climb to the top. 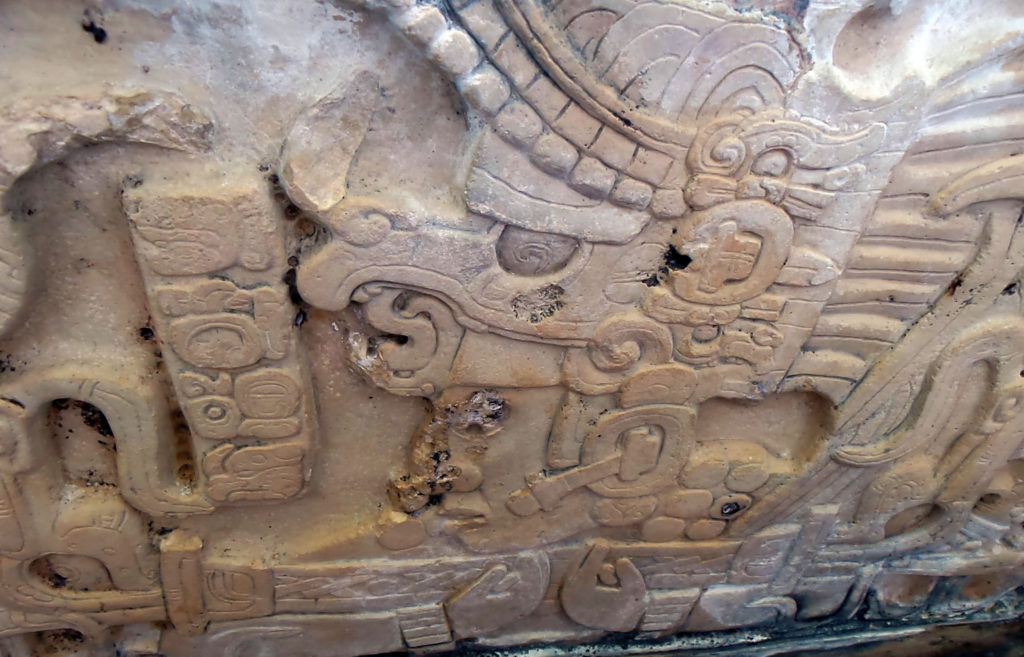 But before we did that, check out the detail on this door lintel. 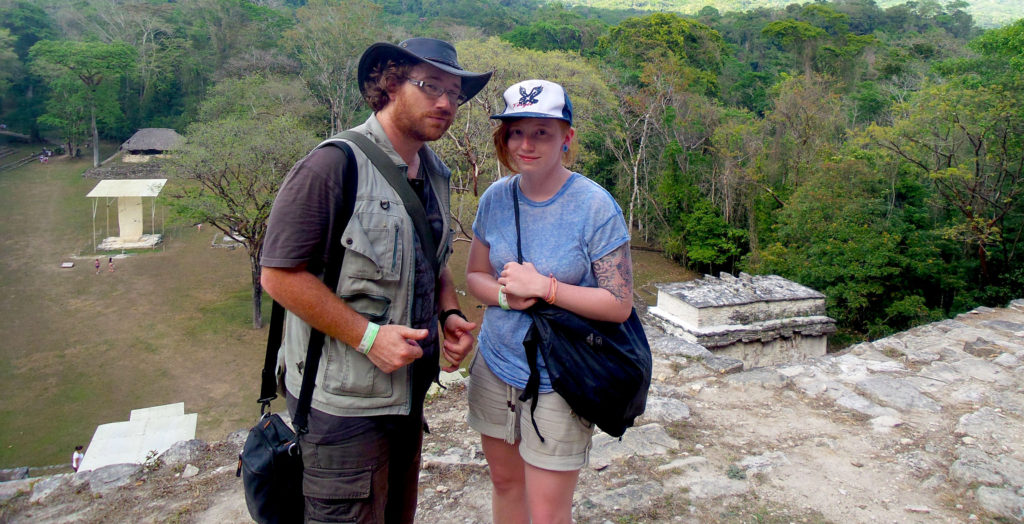 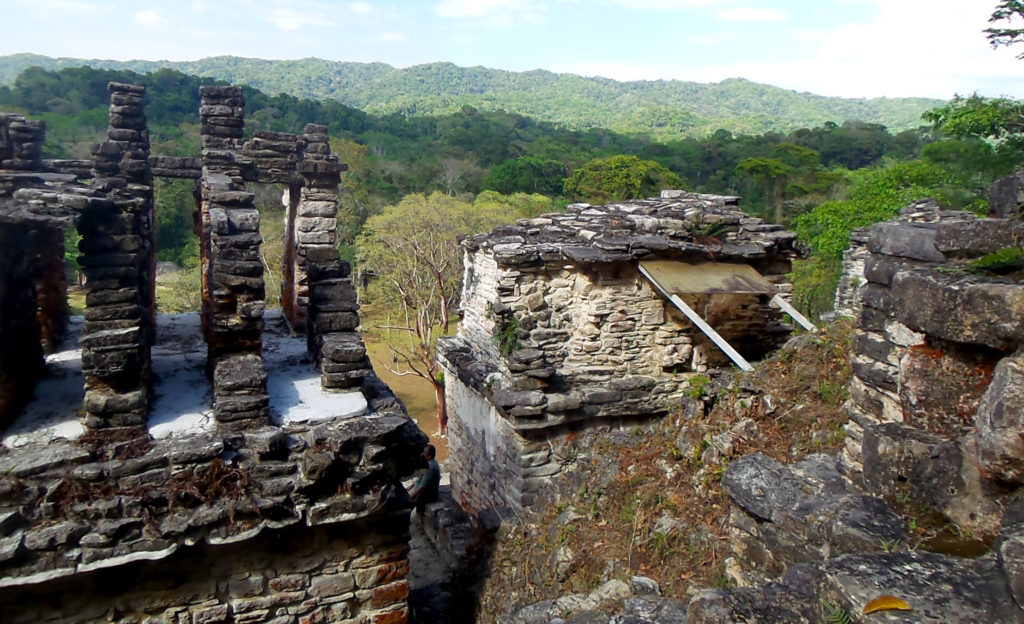 Where we checked out the old acropolis of Bonampak. 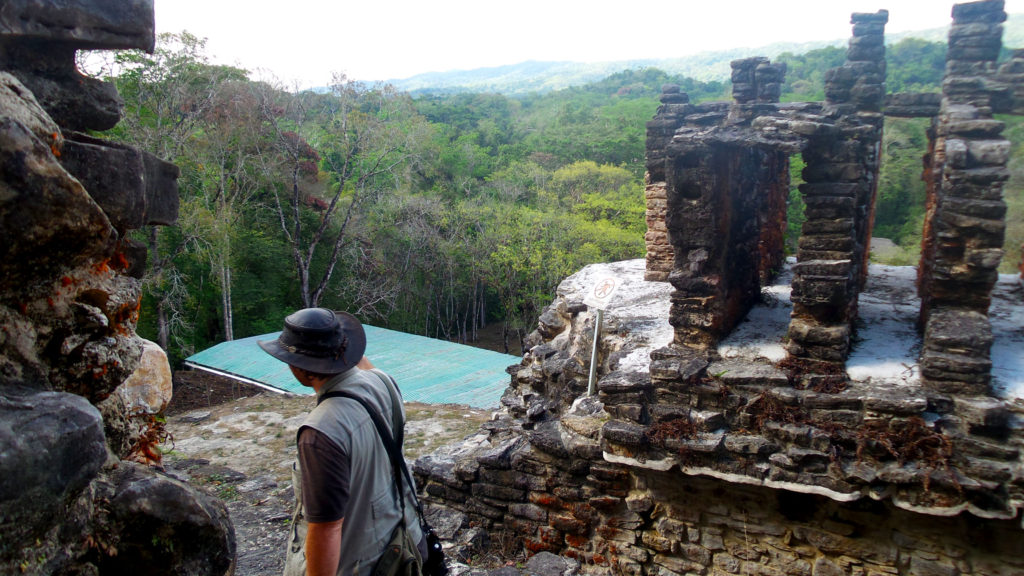 Not wishing to infuriate our driver any more (we were convinced he’d burst a blood vessel if we were late again), we decided to head back to the park entrance in good time. 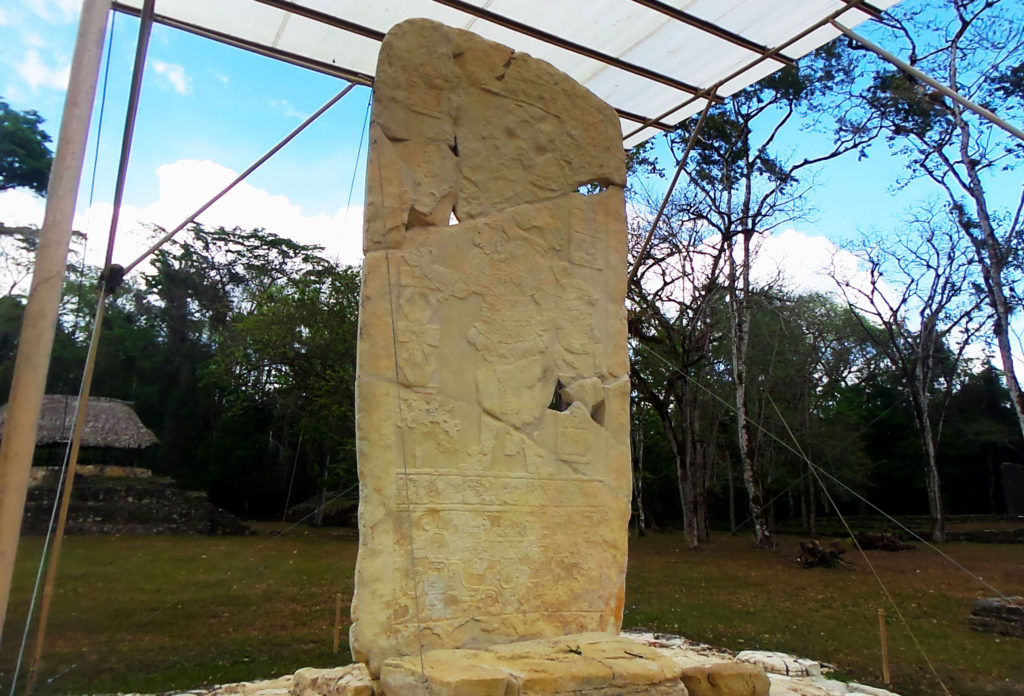 Along the way we stopped to take a picture of this magnificent stela, which is situated at the foot of the temple. 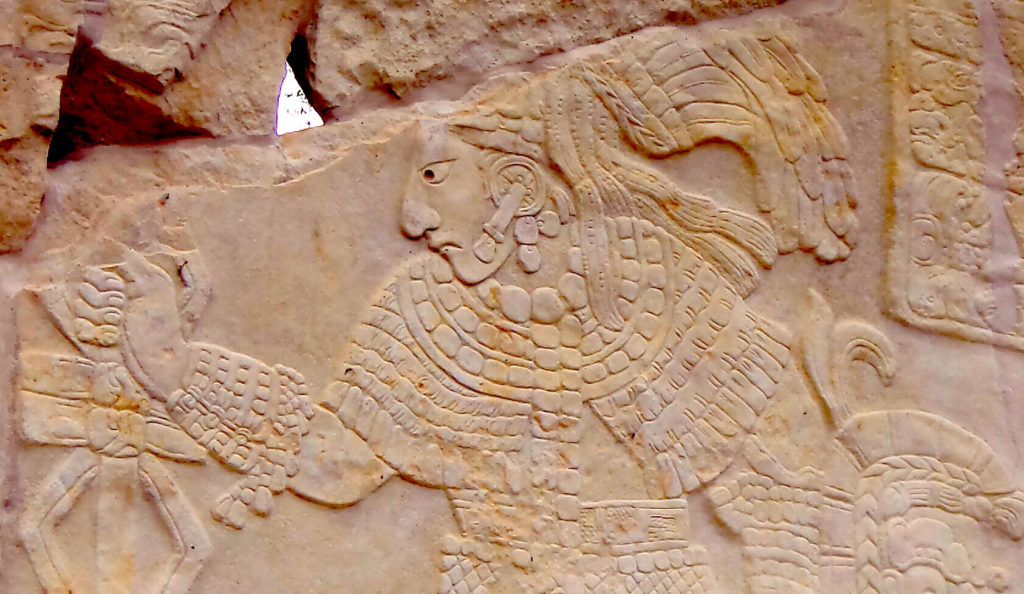 Soon enough we were bundled back into the minibus and were taken to the charming little Mayan village of Lacanja Chansayab, close to the border with Guatemala. Casey and I were the only two from the minibus party to be staying here the night. 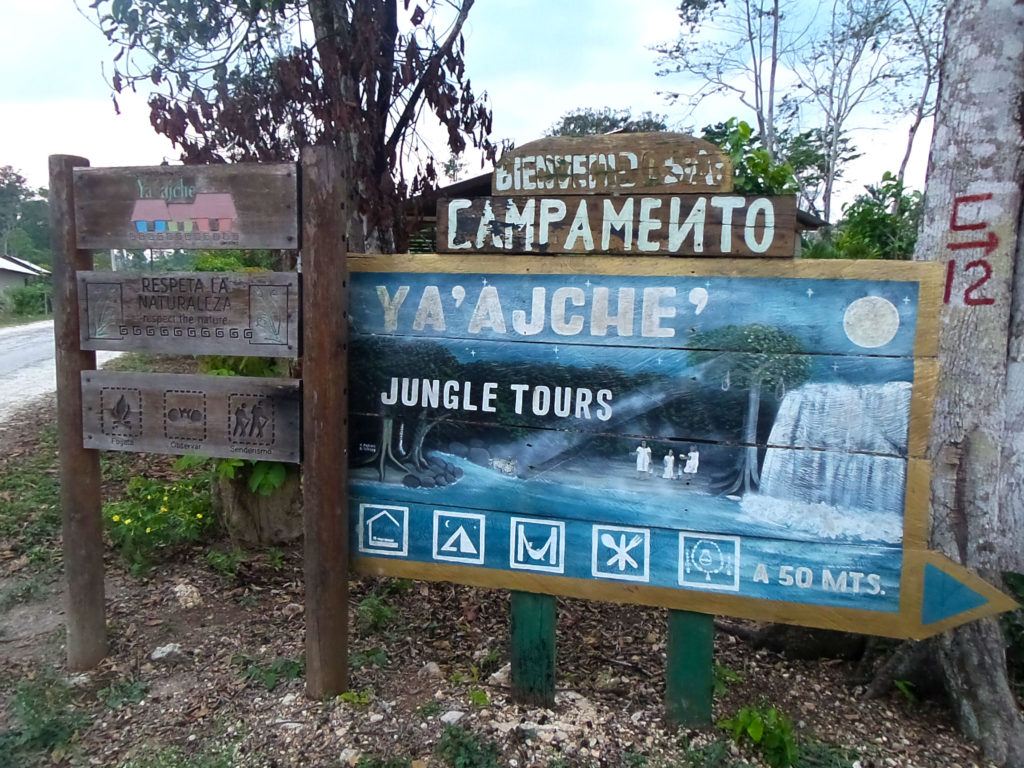 After a pleasant walk around the village (we went searching for a waterfall, but never found it), we stayed the night in one of these delightful little huts of the Ya’ajche’ campamento, something of an inspiration for what we could do with Jinja Island someday. 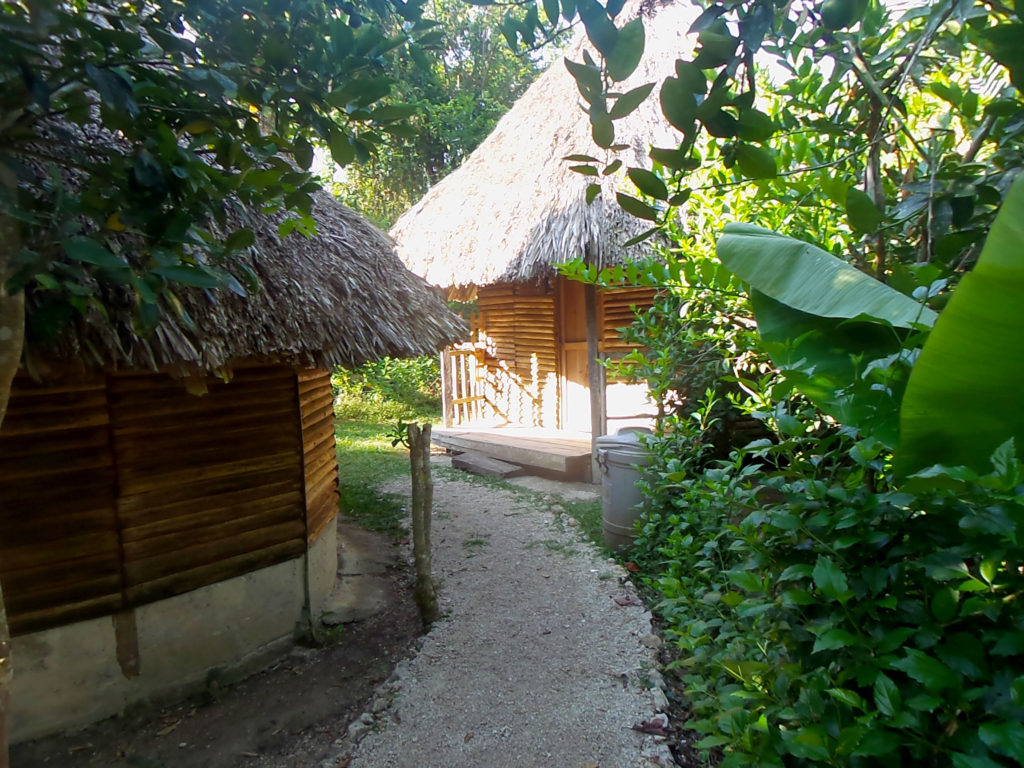 I Will Make it Legal

Floating In a Most Peculiar Way