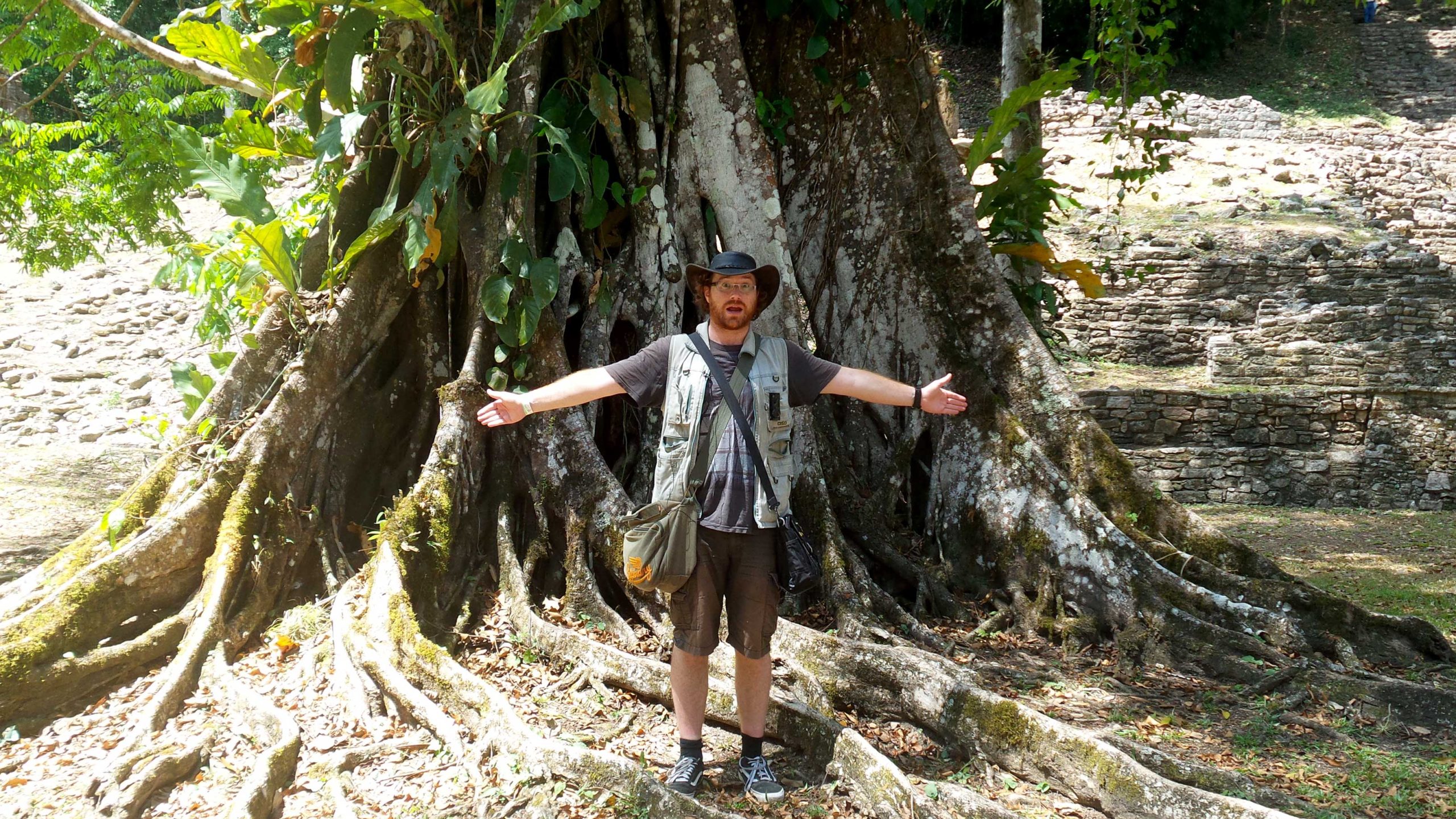 We were told to be ready to go at 6.30am for today’s organised tour of Yaxchilan and Bonampak. However, the driver of the minibus had been told we’d meet him outside the backpackers at 6am. I like to squeeze out the last possible second of sleep before dragging my carcass out of bed, so this was somewhat of an annoyance, but my personal annoyance was nothing compared to that of the driver. I was worried that he might burst a blood vessel – screaming and shouting in Spanish like he’d just found his wife in bed with his least favourite mule.

I took it in my stride, whatevers dude, since my two stints in African jails I’m the king of travel zen. Happily everybody else he had to pick up weren’t quite ready either… FUNNY DAT.

We hurtled out of town at a great rate of knots, stopping for breakfast along the way. The other people in the minibus were backpackers from all over the world, but I was a bit too sleepy to engage in any meaningful conversation.

Around 10am we arrived at Frontera Corozal on the Usumacinta River. The river forms the boundary between Mexico and Guatemala and Yaxchilan is to be found about an hour downstream. We left our backpacks on the bus and headed down to the boat that was waiting for us to take us to the site. Like Lamanai, Yaxchilan is not accessible by road – for the Mayans rivers were their highways. In fact, until fairly recently, the only way to reach Yaxchilan was a 100 mile journey down the Usumacinta. 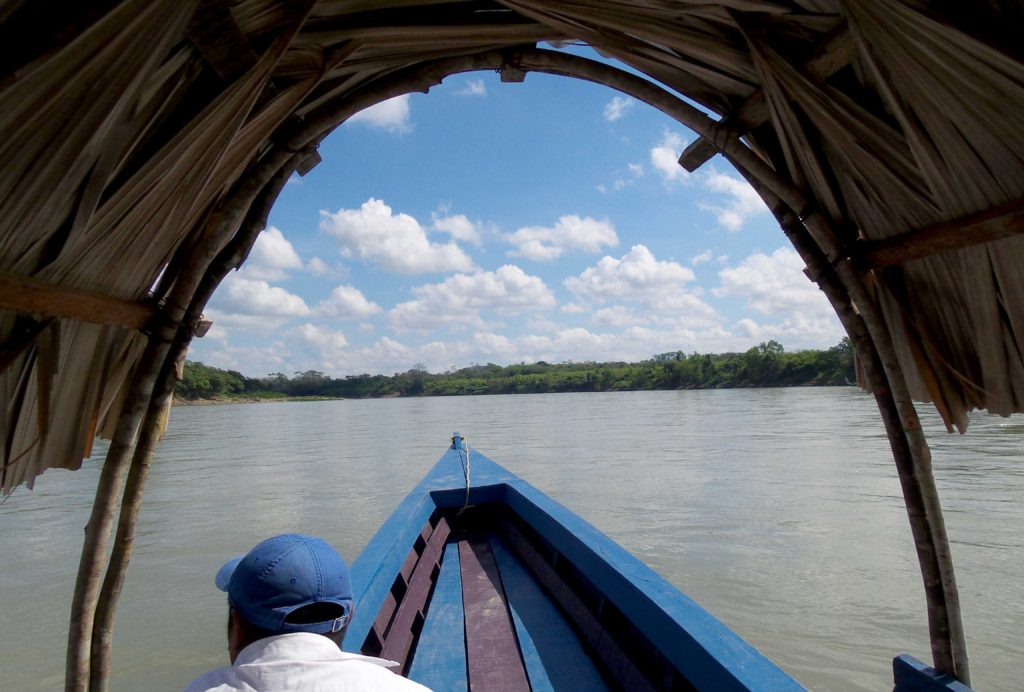 Yaxchilan is an ancient Maya city located on the bank of the Usumacinta River in what is now the state of Chiapas, Mexico. In the Late Classic Period Yaxchilan was one of the most powerful Maya states along the course of the Usumacinta, with Piedras Negras as its major rival. Architectural styles in subordinate sites in the Usumacinta region demonstrate clear differences that mark a clear boundary between the two kingdoms. 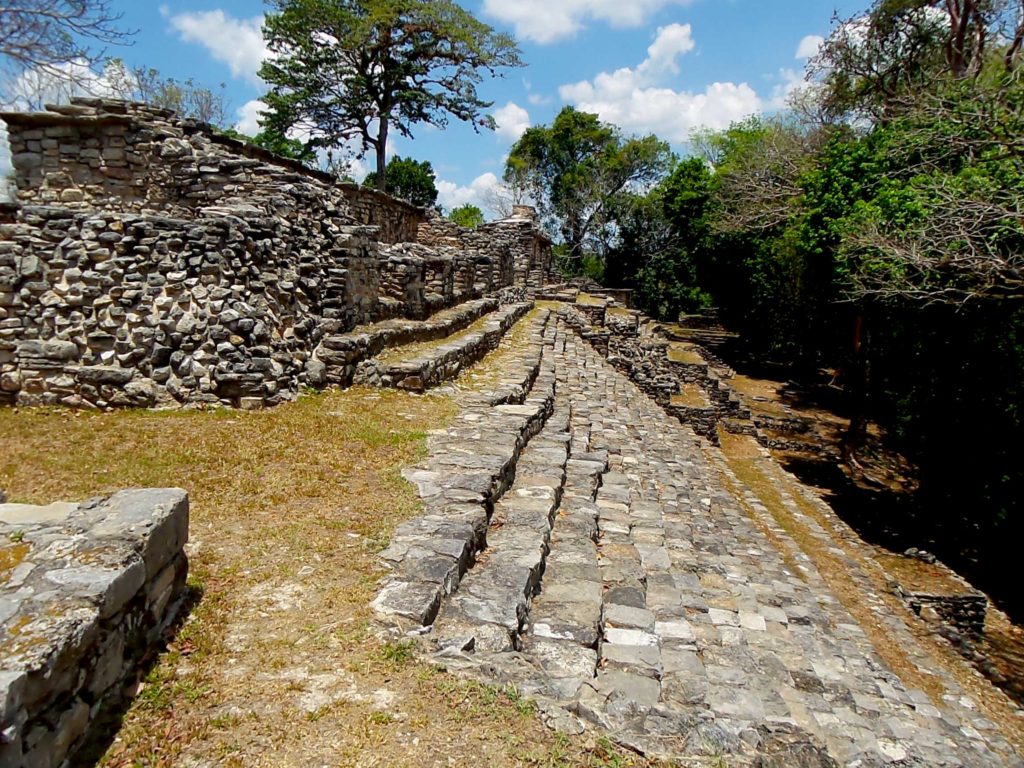 Yaxchilan was a large centre, important throughout the Classic era, and the dominant power of the Usumacinta River area. It dominated such smaller sites as Bonampak and had a long rivalry with Piedras Negras and at least for a time with Tikal; it was a rival of Palenque, with which Yaxchilan warred in 654. 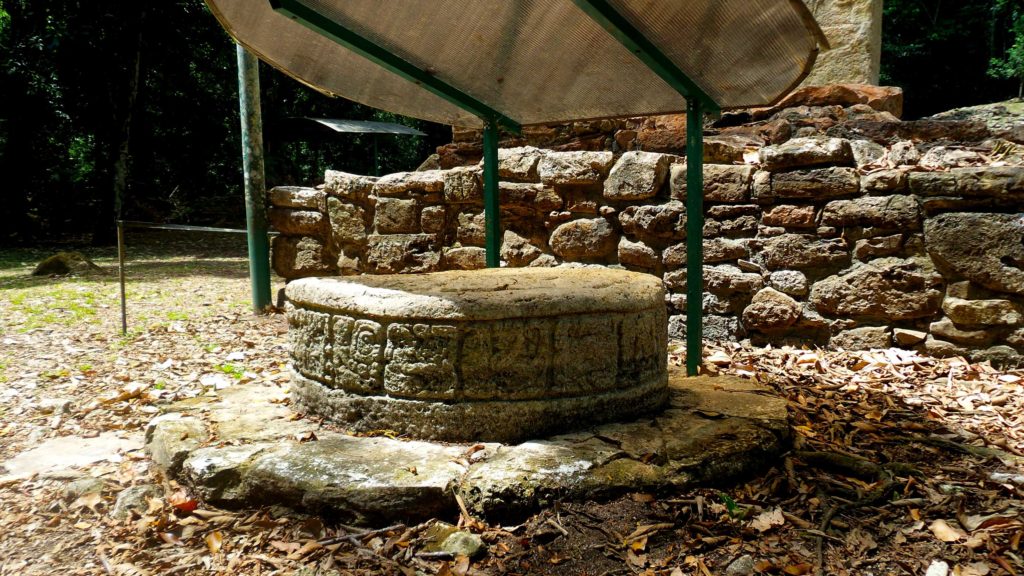 The site contains impressive ruins, with palaces and temples bordering a large plaza upon a terrace above the Usumacinta River. The architectural remains extend across the higher terraces and the hills to the south of the river, overlooking both the river itself and the lowlands beyond. Yaxchilan is known for the large quantity of excellent sculpture at the site, such as the monolithic carved stelae and the narrative stone reliefs carved on lintels spanning the temple doorways. Over 120 inscriptions have been identified on the various monuments from the site.

Yaxchilan has its origins in the Preclassic Period. A large part of what is known of the Classic Period history of the city comes from the hieroglyphic texts of the kings who ruled during its Late Classic apogee, one of the most important of which is Hieroglyphic Stairway 1. Some retrospective inscriptions appear to have been used to rewrite Yaxchilan’s dynastic history to suit king Bird Jaguar IV. Before the rule of king Itzamnaaj Balam II, who reigned from 681 to 742, the city was relatively small. The city-state then grew to a regional capital and the dynasty lasted into the early 9th century. 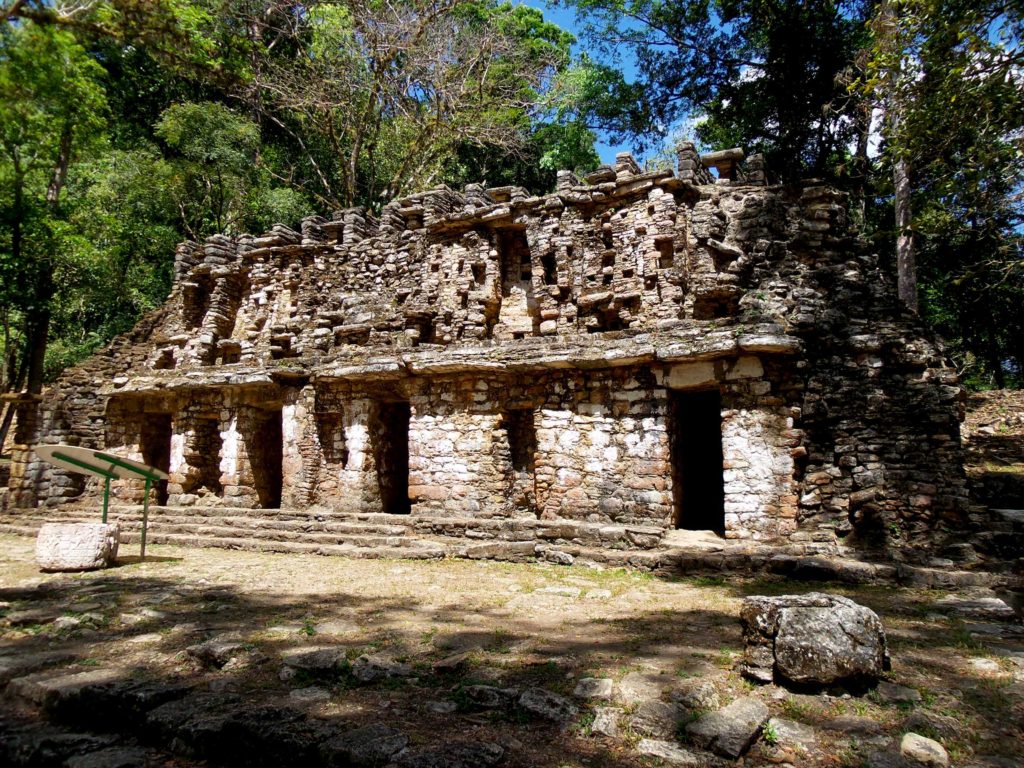 The known history of Yaxchilan starts with the enthronement of Yopaat B’alam I, most likely on 23 July 359. He was the founder of a long dynasty, and took the throne when Yaxchilan was still a minor site. Hieroglyphic inscriptions dating to the Late Classic describe a series of wars in the Early Classic between the city and its neighbours. 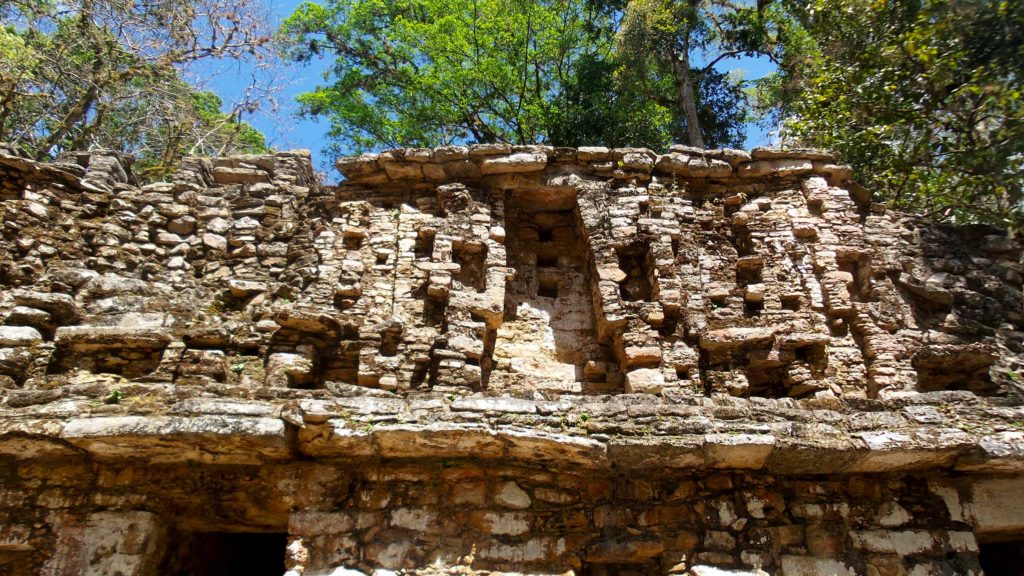 K’inich Tatb’u Skull I ruled in the early 5th century and was the first of the rulers of Yaxchilan to be recorded as having taken a rival king as a war captive, his prisoner being king Bird Jaguar of Bonampak (not to be confused with the four rulers of Yaxchilan who bore the same name). The long running rivalry with Piedras Negras had already begun by the fifth century AD, with both cities struggling to dominate the Usumacinta trade route. King Moon Skull was credited with gaining a victory over Piedras Negras in 460 and with capturing the enemy king, known only as “Ruler A”. By the middle of the 5th century Yaxchilan had formal contacts with the great city of Tikal. Bird Jaguar II, the next king of Yaxchilan, captured a vassal of the king of Piedras Negras around 478. 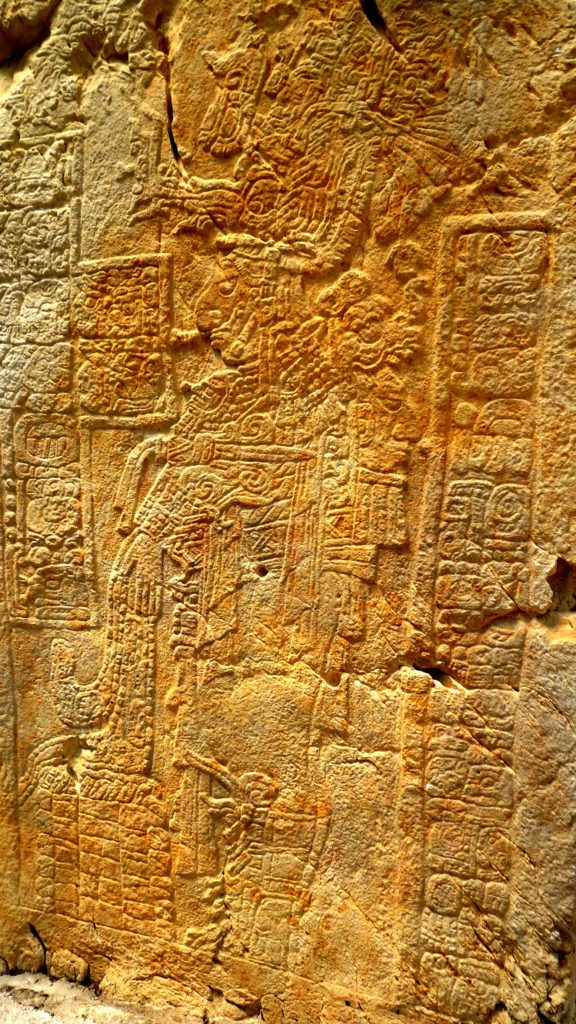 Knot-eye Jaguar I was a warlike king who was recorded as capturing nobles from Bonampak, Piedras Negras and the great city of Tikal. In 514, Knot-eye Jaguar I was taken captive by Ruler C of Piedras Negras, as depicted on Lintel 12 from that city, where he is shown kneeling before the enemy king with his wrists bound. His successor, K’inich Tatb’u Skull II, was enthroned on 11 February 526. This king is notable for the series of carved lintels he commissioned, including a dynastic list that provides information on the early kings of the city. K’inich Tatb’u Skull II oversaw a revival of Yaxchilan’s fortunes and he captured lords from Bonampak, Lakamtuun and, notably, the lord of Calakmul, one of the two great Maya powers of the Classic Period, as well as a success against Tikal, the second great power. 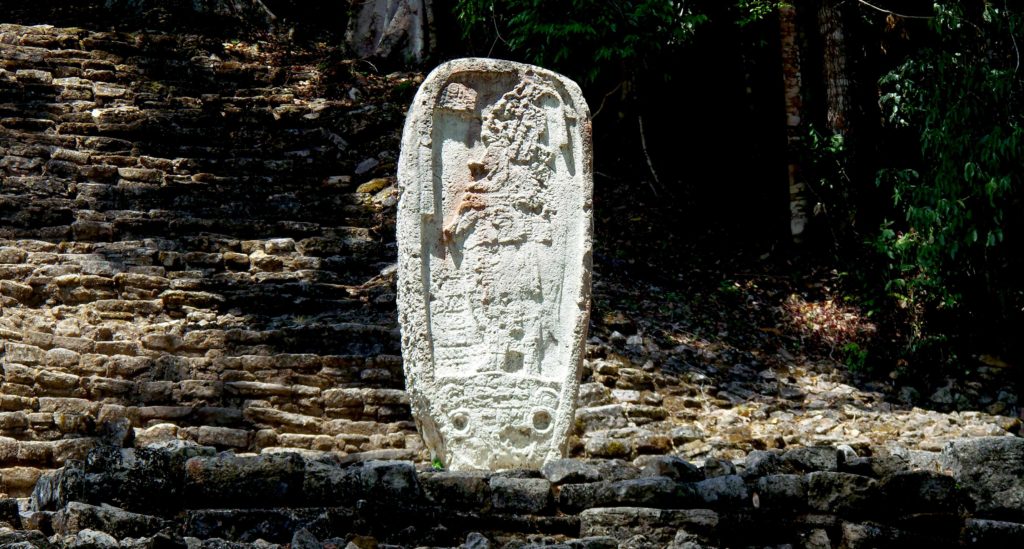 Little is known of the history of Yaxchilan from 537 to 629, although four kings are known to have reigned in this period. Knot-eye Jaguar II is known to have captured the lord of Lacanha in 564, one of the few events that can be identified from this period. It may be that the lack of an inscribed history for this lengthy period indicates that Yaxchilan had fallen under the dominion of a more powerful neighbour, such as Piedras Negras, Palenque or Toniná, all of which were powerful polities in the Usumacinta region at this time. 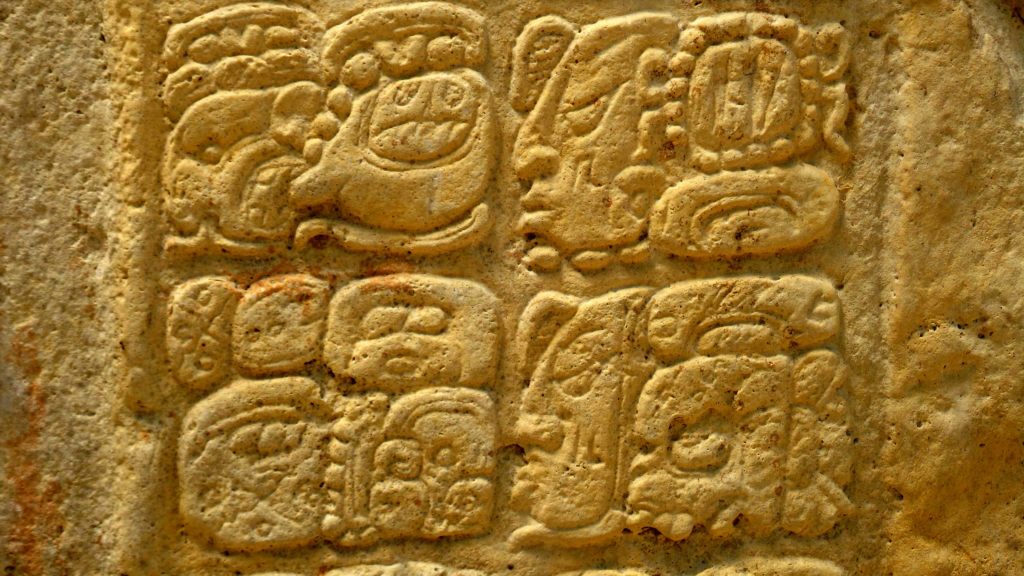 Yaxchilan reached its greatest power during the reigns of King Itzamnaaj B’alam II, who died in his 90s in 742, and his son Bird Jaguar IV. Itzamnaaj B’alam II was enthroned in October 681 and he ruled for more than sixty years. During the last third of his reign he was responsible for a monumental building programme that included the erection of magnificent buildings with richly carved lintels, hieroglyphic stairways and carved stelae, transforming the centre of the city. During his reign, the kingdom of Yaxchilán extended to include the nearby sites of La Pasadita and El Chicozapote to the northwest of the city. At times the sites of Lacanha and Bonampak appear to have been under his domination, although this region was controlled by Toniná in 715. 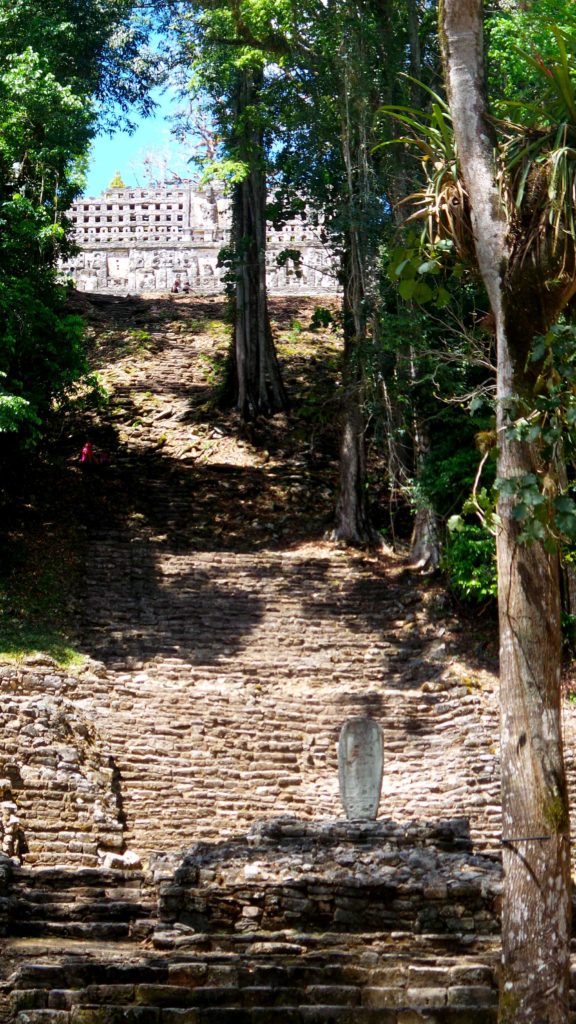 In 726, Yaxchilan was defeated by its rival Piedras Negras. A sajal (subordinate lord) of Itzamnaaj B’alam II was captured by the enemy city, an event that is suspiciously absent from inscriptions at Yaxchilán. It is after this period, over forty years into the reign of Itzamnaaj B’alam II, that this king embarked upon his impressive building programme, this may indicate that at this time Yaxchilan was able to exert independence from the hegemony of once powerful neighbours and claim greater political independence and more lucrative control of riverine trade. 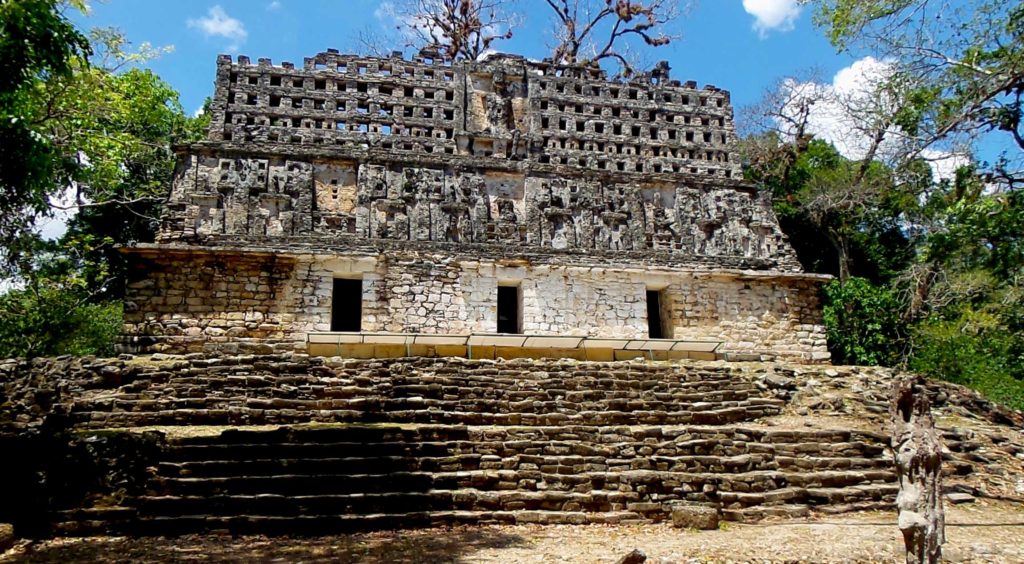 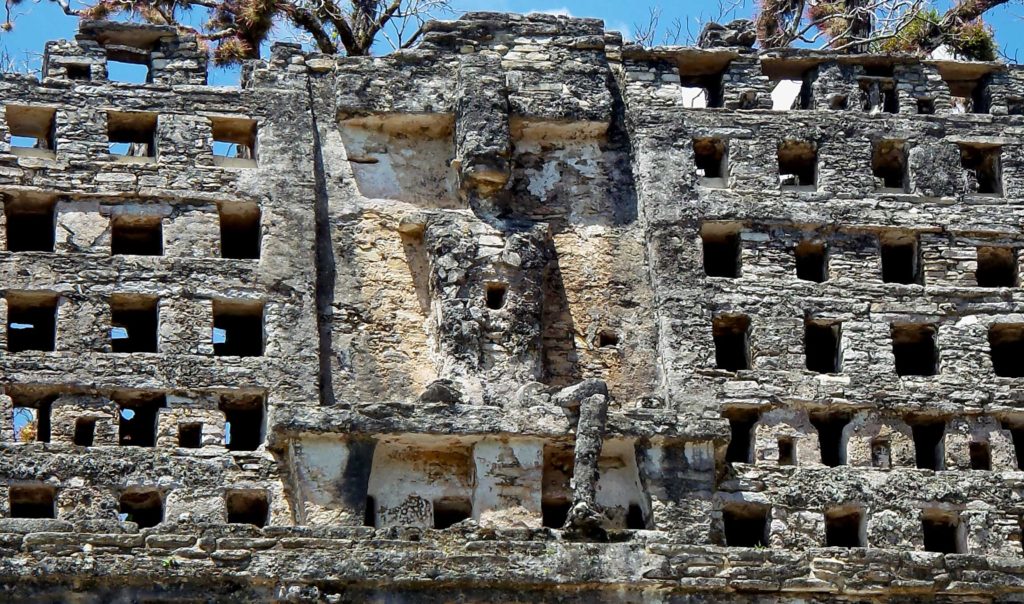 Yaxchilan retaliated in 759, gaining a victory over its enemy. Circa 790 CE, Yaxchilan’s king Shield Jaguar III oversaw the installation of Chan Muwaan II in Bonampak, and hired Yaxchilano artisans to commemorate it (and the previous Chan Muwaan) in “Structure I”‘s murals. 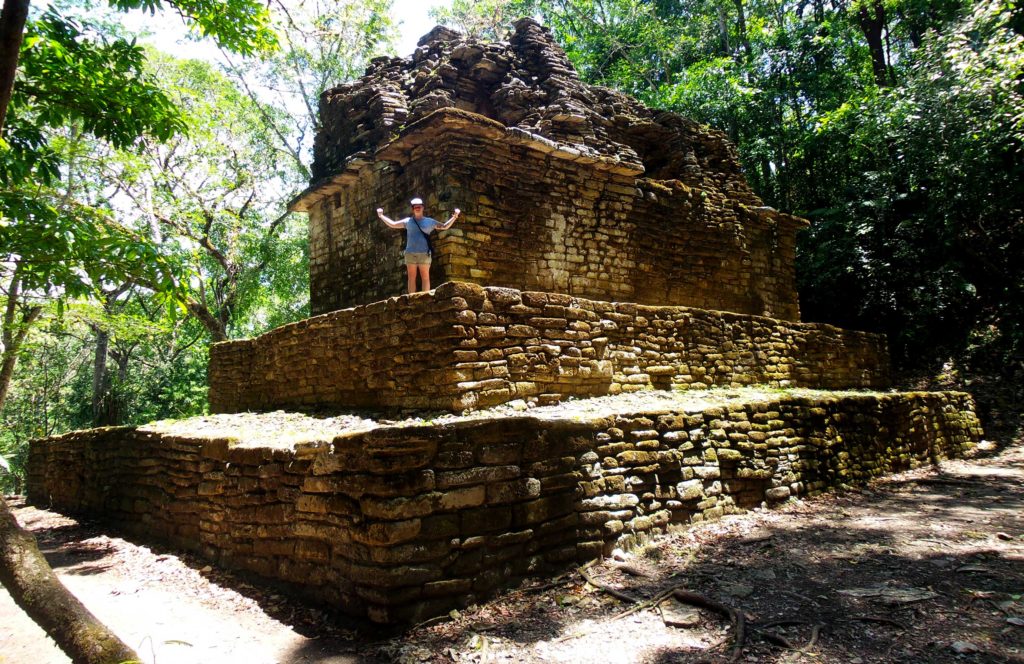 In 808, king K’inich Tatb’u Skull III marked his capture of the king of Piedras Negras, an event that probably represented the final overthrow of Yaxchilan’s long running enemy, ending dynastic rule there and destroying the city as a capital. Yaxchilan reached its peak during the Late Classical period of 800 to 1000 AD, but after that… nothing. The place was abandoned to the jungle long before the conquistadors turned up. 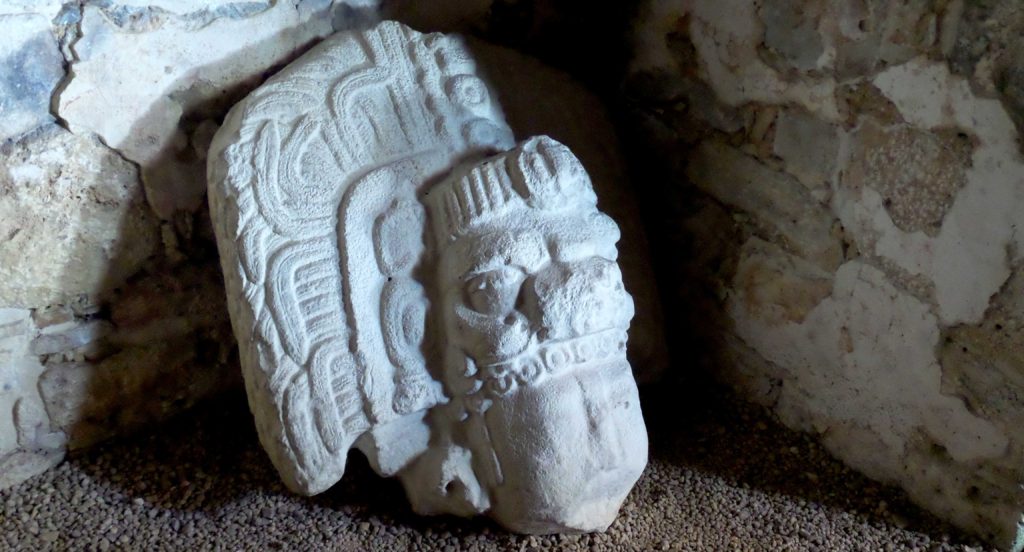 The place was rediscovered in the 1800s, but it was the 1880s before any detailed surveys were carried out and large-scale excavations would have to wait until well into the 20th century. 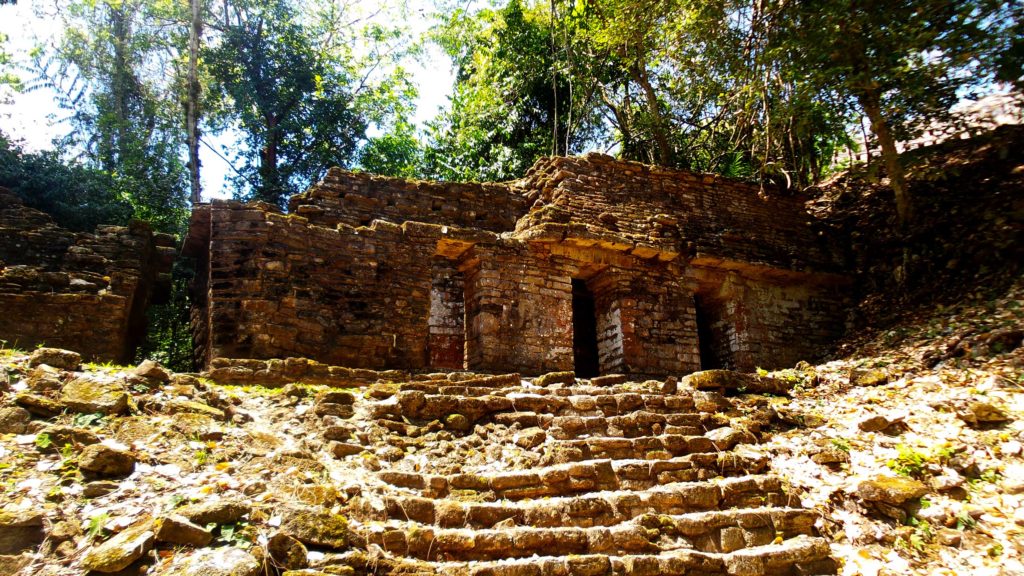 As far as Yaxchilan’s buildings are concerned, the major groups are the Central Acropolis, the West Acropolis and the South Acropolis. The South Acropolis occupies the highest part of the site. The site is aligned with relation to the Usumacinta River, at times causing unconventional orientation of the major structures, such as the two ballcourts. 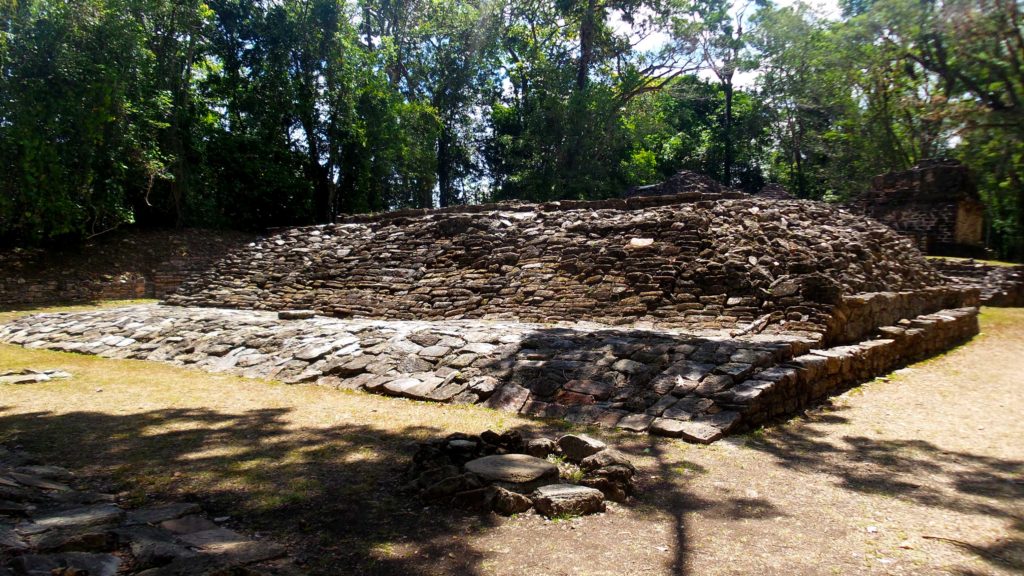 You enter the site through the Labyrinth, which lies at the western edge of the Central Acropolis. The Labyrinth is a temple with rooms spread over three levels, linked by interior stairways. The temple facade has four doorways, with three doorway-sized niches between them. Two sculptured altars are located in front of the structure, which still has the remains of a perforated roof comb. 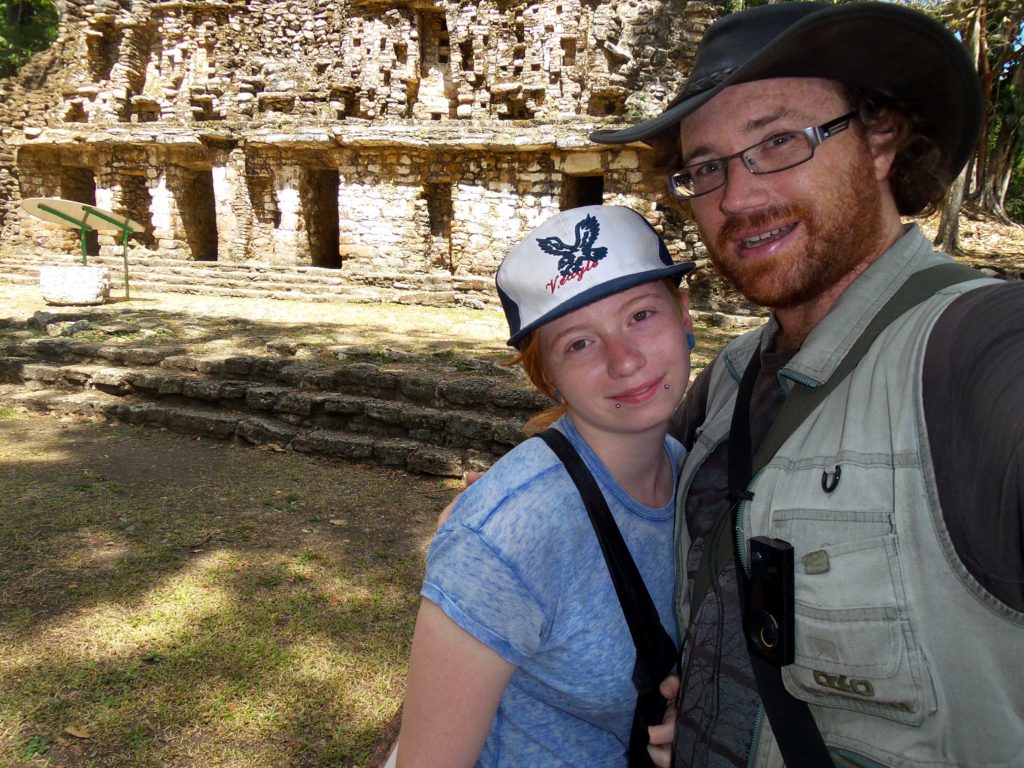 On the way up to the South Acropolis Casey was dying from the combination of the heat and the slog. I suggested she head on down to the boat and I would meet her there. 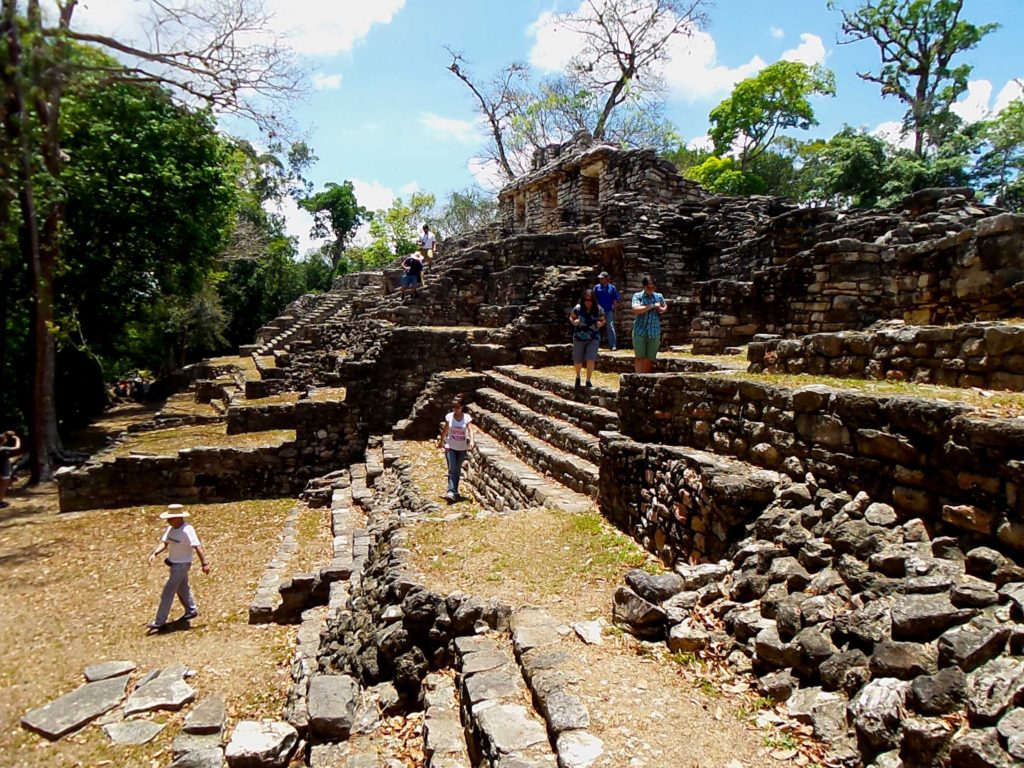 After checking out the acropolis, I hurried down to the boat to find that Casey wasn’t there. With no mobile phone reception I started to get a bit worried. The boat driver was itching to go (what is with guys around here and ruthless efficiency?) and so I ran back into the site, getting myself lost in the damn labyrinth along the way. 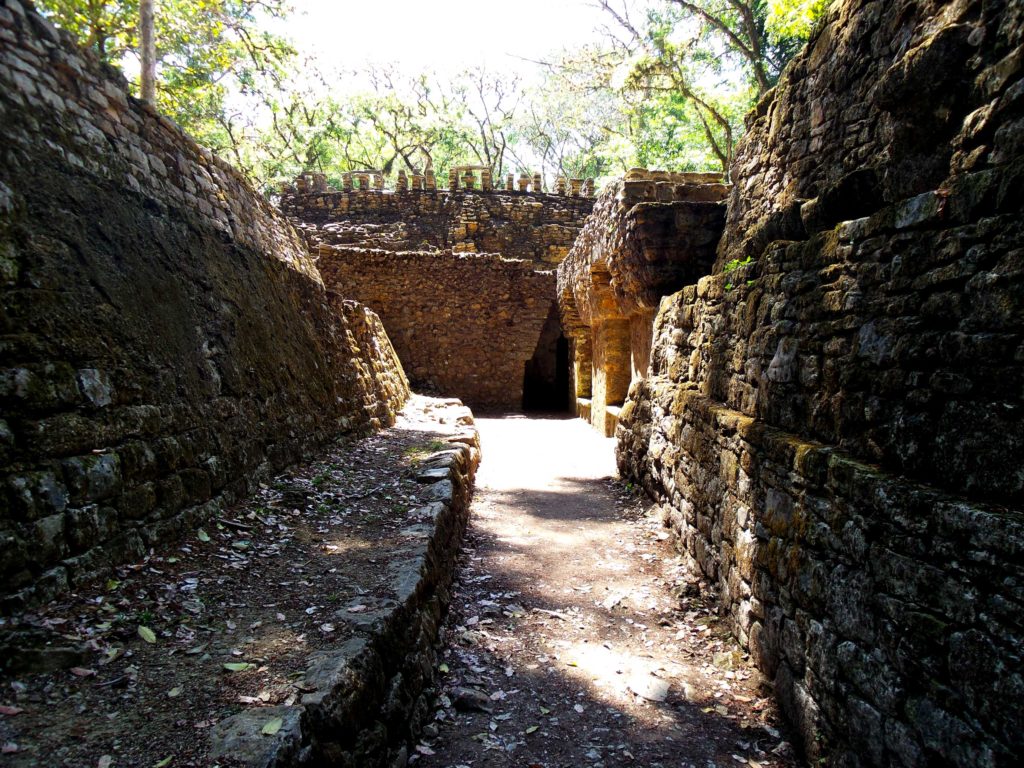 I eventually found Casey halfway up the hill that leads up to the acropolis. She had got totally lost and was pretty upset. I did my best to console her, but we really needed to get going – I knew the boat driver would not wait. So I took her hand and we ran the best we could back through the ruins in the sweltering heat. The boat was still there – just!

She had dropped it somewhere on the run back.

We had to go and look for it. “Cinco minutos!” I cried out and dragged Casey back to the labyrinth, retracing our steps. Casey was stressed as hell, but all I could think was – “well, we get this sorted, get back on the boat and then we can chill. Yaxchillin’.”

I found the phone on the ground to the right of the labyrinth exit (ol’ eagle eyes here) and we raced back through the labyrinth to the dock. Puffing and panting and sweating like a right pair of goons we got there just in time to see the boat depart. Without us.