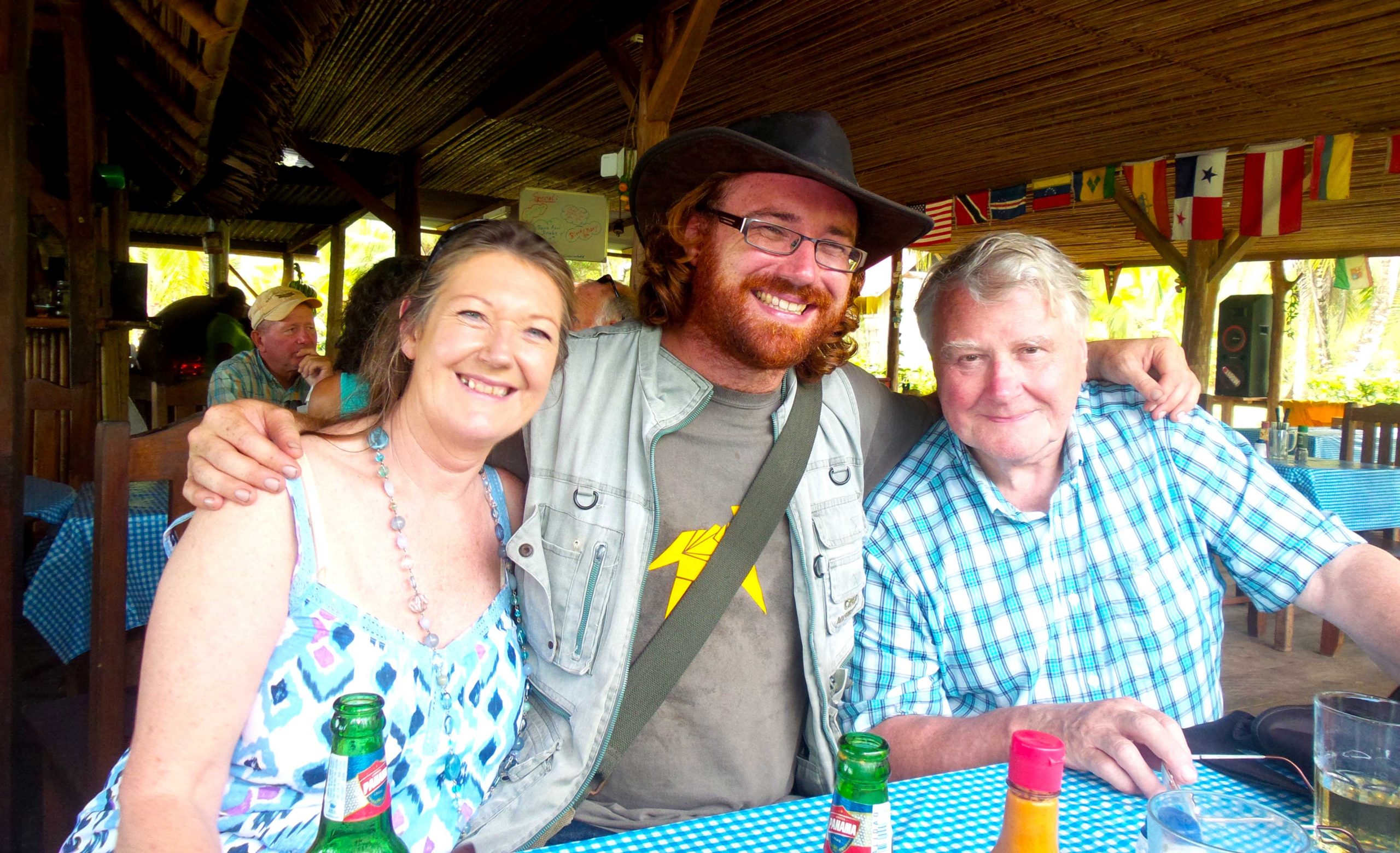 After the sunny days, boat rides and parties of October, wet old November arrived like a dull thud. Remember Caska my favourite chicken? 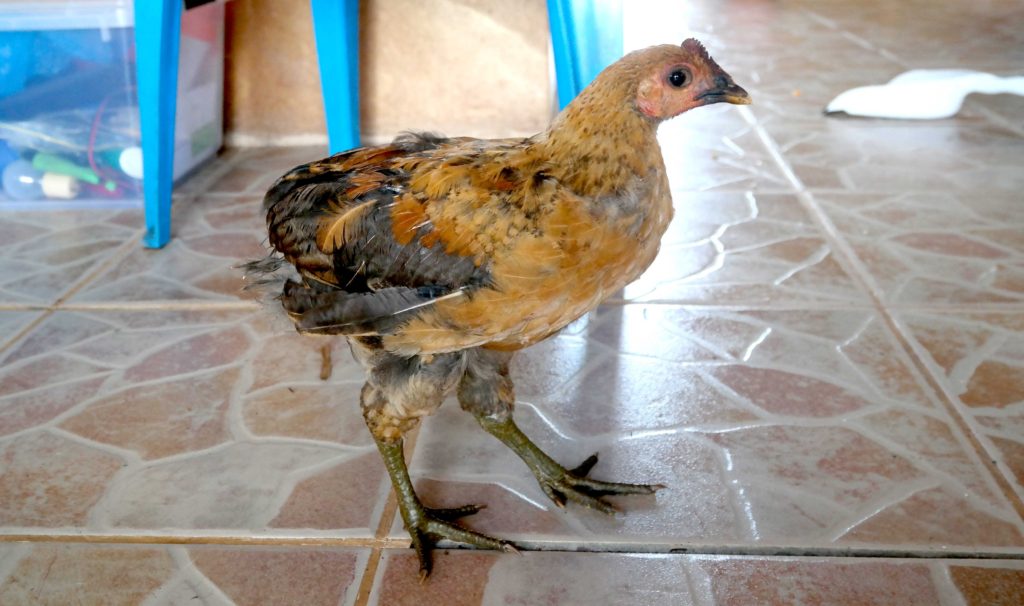 Well for the first few days of November she wasn’t quite herself. She’d still pop up the stairs for food, regular as clockwork, but she was looking frail. The other 3 chicks that hatched at the same time were almost twice as big as her.

On November 3rd I found Caska standing still in the garden. It was weird – I don’t know that much about chickens, but I know they don’t just *stand*. I picked her up and she didn’t flinch.

I brought her into the house and set her down on a pillow and gave her some food. I thought she ate it, but maybe she just moved it around with her beak, I dunno.

The next day it was raining. I took Caska downstairs and put her in the chicken house while I worked downstairs on my masterplan of building a deck and covering the ugly cinder block and concrete structure under the house.

A few hours later I went to the chicken house to see how Caska was doing, but she wasn’t there. I looked around and there she was, slumped over, soaking wet and covered in horrible biting ants. I picked her up, getting bitten by a zillion fire ants in the process and rinsed her under the tap, but it was too late. She was dead.

I left her in the house that night, all warm and wrapped in kitchen roll, hoping maybe by some miracle she might wake up, but no, she was gone. 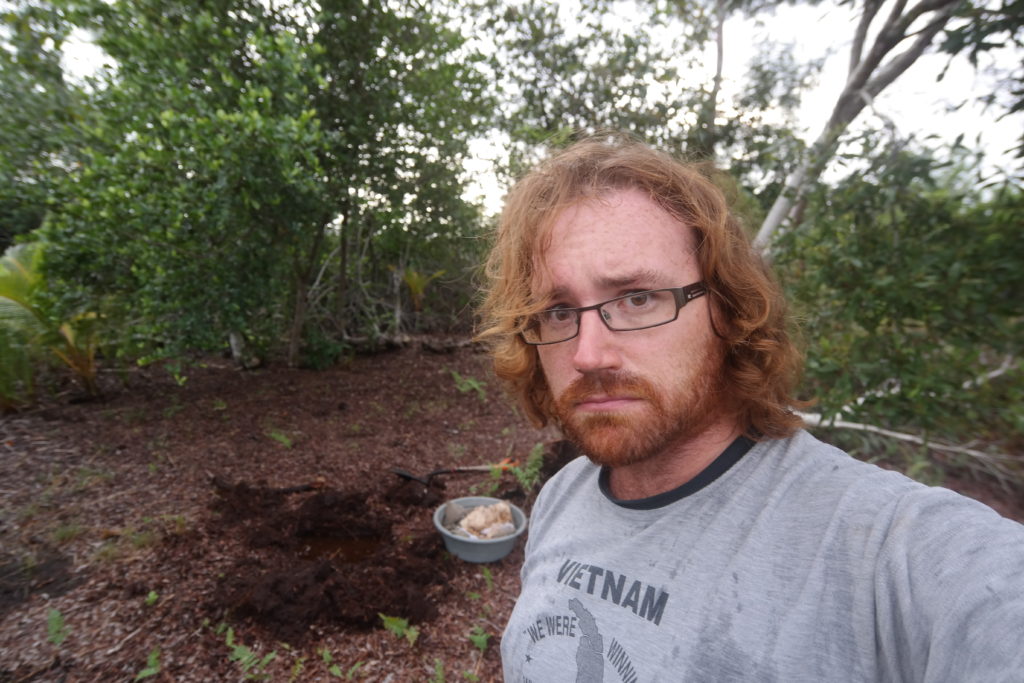 I dug a grave for my wee little Caskaferian and planted a palm tree in her honour. 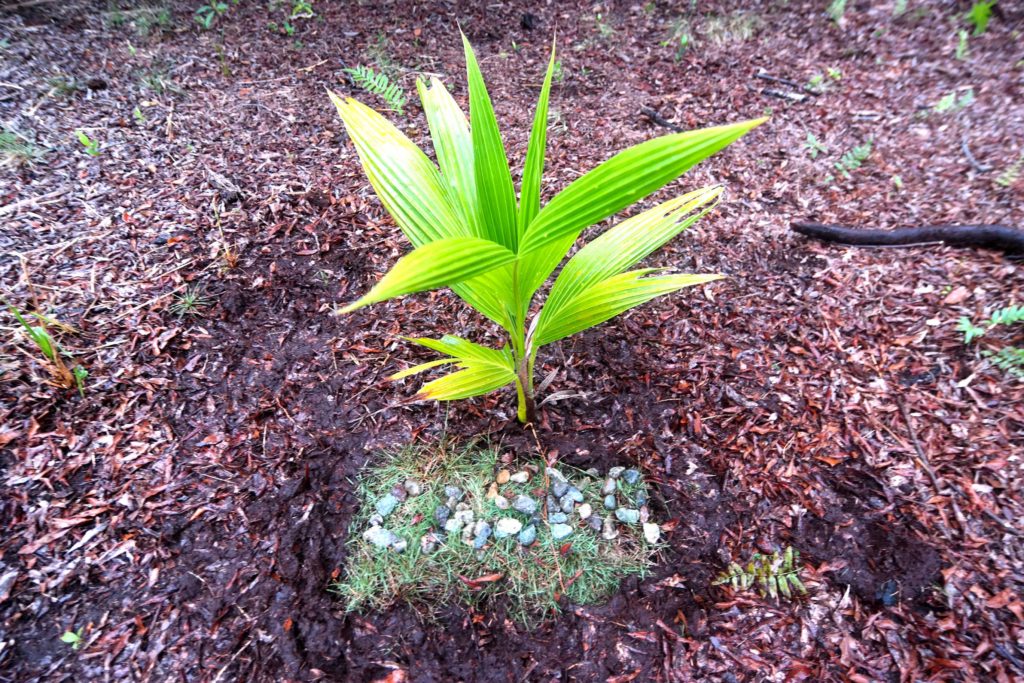 Later that day, a rainbow appeared at the end of the island where I buried her. 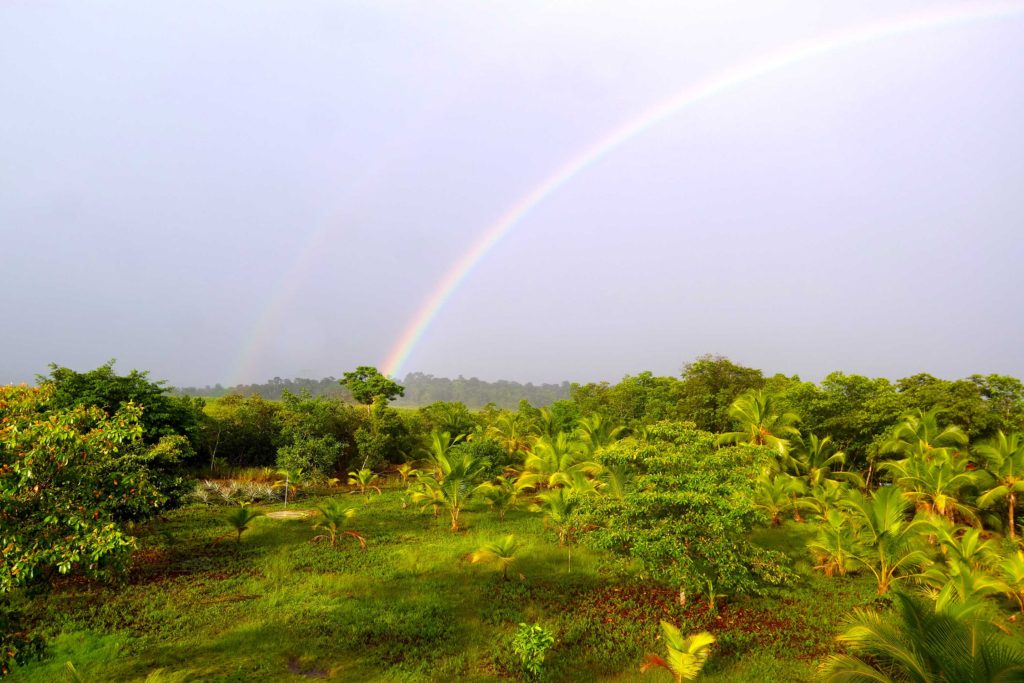 I’ll miss her. She was always so very polite, the sweet little thing.

After I dried my tears I started getting the place ship-shaped and Bristol fashion. Why?

Cos my parents were coming to visit!

They arrived a couple of days later on the afternoon flight into Bocas Del Toro. However, this was what the view looking towards Bocas Town looked like from my boat dock. At midday. 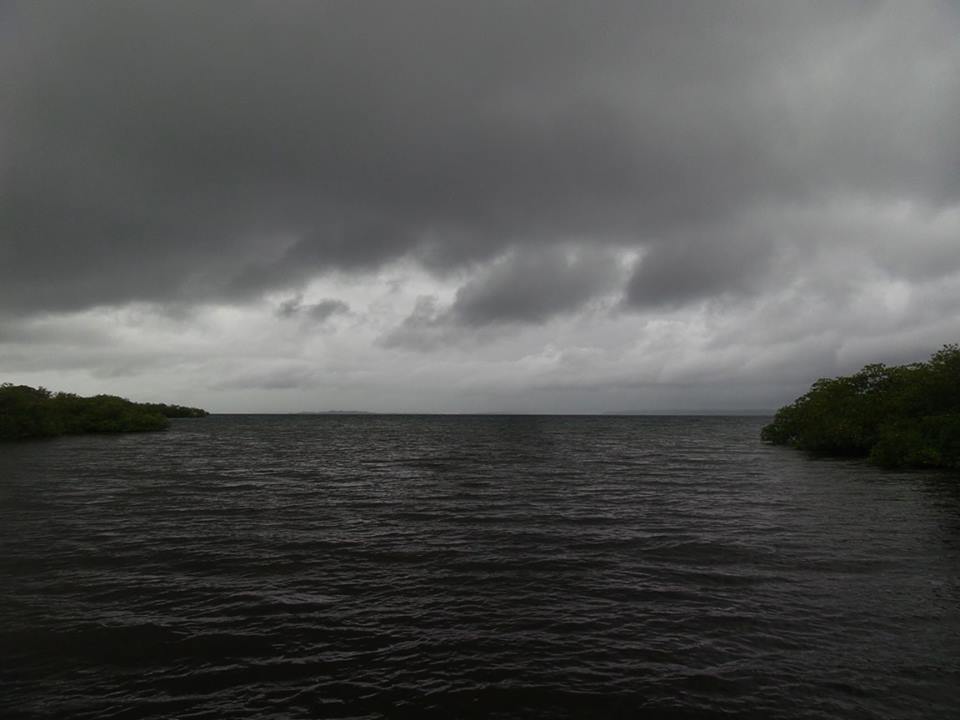 The wind was pretty bad and it was pouring with rain. I really didn’t want to have to take my little boat out in that.

So I waited on the boat dock for the storm to subside (as weather.com was telling me it would). Around 3pm the rain stopped and the wind died down. So I went for it. I was about halfway to Bocas Town (about 5km out from my island) in my little speedboat when the heavens reopened and everything went a bit berserk.

Between the fog and the water on my glasses, I could just about make out the island to my left (Cristobal) and the island to my right (Solarte) and used these long grey splodges to work out which way Bocas Town was (which I couldn’t see). Whilst battling the swell, the strong headwind and the heavy rain smarting my face like a thousand tiny needles I thought CRIKEY MY HAT! I put the engine in neutral and took my hat from down the side of my seat and placed it in the black plastic bag under the tarpaulin at the front of the boat.

I slammed the throttle forward and continued on my journey, battling the elements, beyond the point of no return – it would take longer to get back to my island.

Only… spidey sense tingling… something didn’t feel right. Is that Cristobal on my left, or Solarte?

I needed to check.

I cut the throttle and dived under the tarpaulin to grab my phone out of my bag – I had offline maps, no probs. Well, only, have you ever tried to operate a smartphone in a rainstorm? The touchscreen is no longer your friend. As the waves smashed against the side of the boat, throwing hilarious amounts of salt water in my face I just about managed to open my map app (between it opening my emails, my twitter and camera mode) and confirm that my boat had performed a sly one-eighty while I was pissing around with my hat.

So I turned the boat around and powered forth towards Bocas, hoping my phone would one day forgive me.

Then, about 3km from Bocas the engine started making a funny noise. I turned to see what it was… the plastic poncho I have on the boat (for situations such as these) had come free with all the rocking and rolling and had blown to the back of the boat and stuck itself to the engine… and some of it had been sucked under the water and was rapidly wrapping itself the propeller.

I put the engine in neutral and jumped to the back of the boat to remove the infernal plastic, and in doing so, the ‘leash line’ that I attach to myself (in case I fall overboard) came unplugged and cut the engine, as it’s supposed to do.

I pulled the plastic off the engine and then went back and turned the key. The engine sounded jammed. I’d have to pull the damn 70 horsepower thing out of the water. On my own. In a storm. Which is what I did.

After checking that the prop could in fact still rotate, I heaved the engine back into the water and returned to the pilot’s chair and turned the ignition key.

Not even an attempt to start.

To make matters worse, I had just used the last bit of phone credit calling Brisas Hotel from my boat dock (something told me this would be a one-way trip) and I had no VHF radio (funnily enough my mum was bringing me one from the UK). So I got out my oar and started to paddle, blowing my emergency whistle for nobody to hear. Usually there are dozens of boats hurtling back and forth between Bocas and Dolphin Bay, but in this storm I was alone. It was all I could do to keep the boat pointing towards Bocas Town (which I could now just about make out in front of me), and after ten minutes of this insanity I gave up. There must be another way.

1. My parents are sure to call me when I don’t meet them at the airport. They could send out a rescue boat.
2. I could just float back to the island (the direction of the swell), but it would take hours to get there, there’s nothing I can use to fix my boat there, I need a mechanic and the mechanic is in Bocas Town.
3. I could try and fix the problem myself, alone, in a storm.

Of course I went for option 3.

The fact that nothing happened when I turned the key, not even a click, told me it was a battery problem. So I dug the battery out of the back of the boat. The problem was immediately obvious – the wire going to the positive terminal had simply snapped off from months of fatigue and salt water damage. Pulling the engine out of the water must have been the last straw.

I grabbed my Swiss Army Knife (always a lifesaver) from my bag under the tarp at the front of the boat and stripped the plastic coating at the end of the wire, but there was no way whatsoever to attach it to the battery. If I had another person in the boat, they could simply hold the wire to the terminal as I turned the key, but as things were, I needed it to stay in place. I tried using duct tape, but did I mention I was in the middle of a storm? It was about as much use as Anne Frank’s drumkit.

So I pulled the battery out as far as I dared, took hold of the broken cable, and then reached with all my might to the ignition key at the front of the boat… with the wind, with the rain, with the swell and waves crashing over the side… stretching, stretching, I could just about make it… I touched the terminal with the bare wire, I turned the key and…

The engine spluttered back to life.

I felt like a more successful George Clooney in A Perfect Storm.

The prop was still knackered, so I had to limp the boat to town at around 4mph. But at least I was moving. My parents called asking where I was. I told them I’d be another ten minutes. 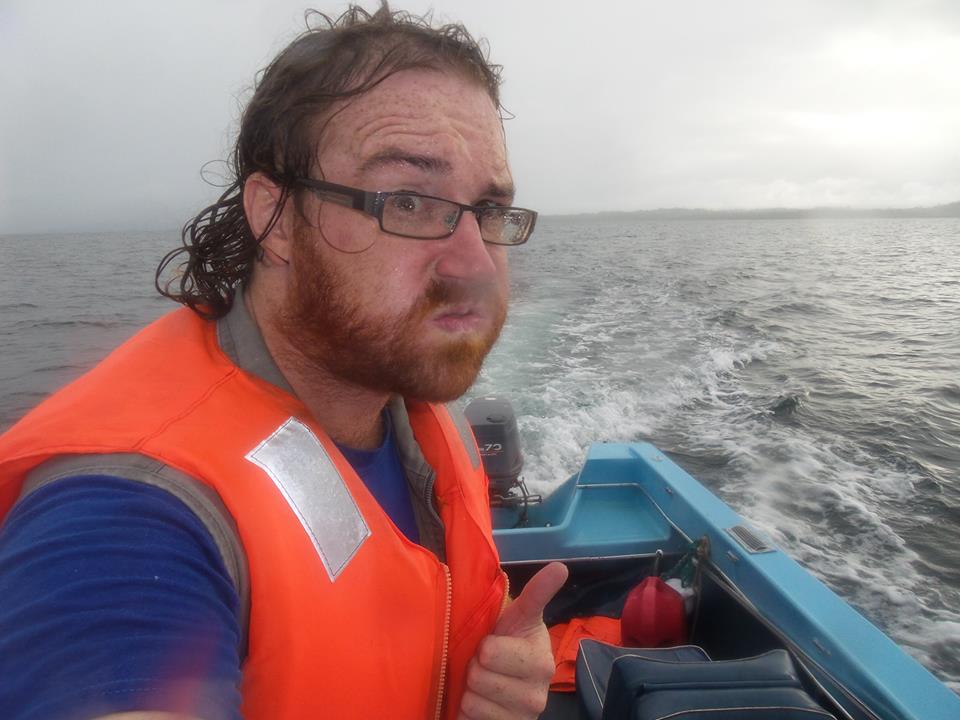 I pulled the boat into my usual parking spot in Brisas hotel. I was dripping wet. Luckily for me, I had left a load of washing at Don Pardo’s Laundry Service the other day. Since I had no intention whatsoever of taking the boat back to Jinja that night, I picked up my laundry and checked me and my parents into Brisas. A quick towel down, some dry clothes and I set off to find Mum and Dad.

We got a bite to eat and I showed them around Bocas. The next day I got the broken battery connection fixed and off we flew back to Jinja on the boat no problem whatsoever. 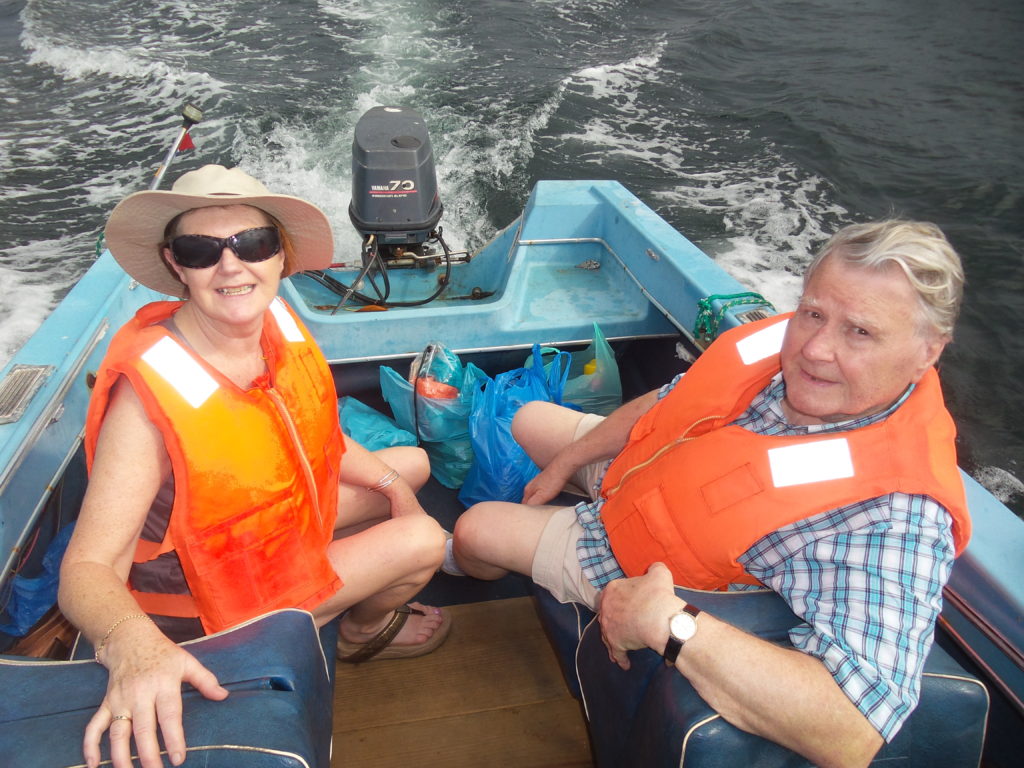 As for the island: my mum absolutely loved the place. Although persuading my dad that he was on a tropical island and should make the most of it was sometimes lost on him, especially when there were crosswords to do and Formula 1 on the telly.

I took them to see Red Frog beach.

We hung out with Bill and Janis. 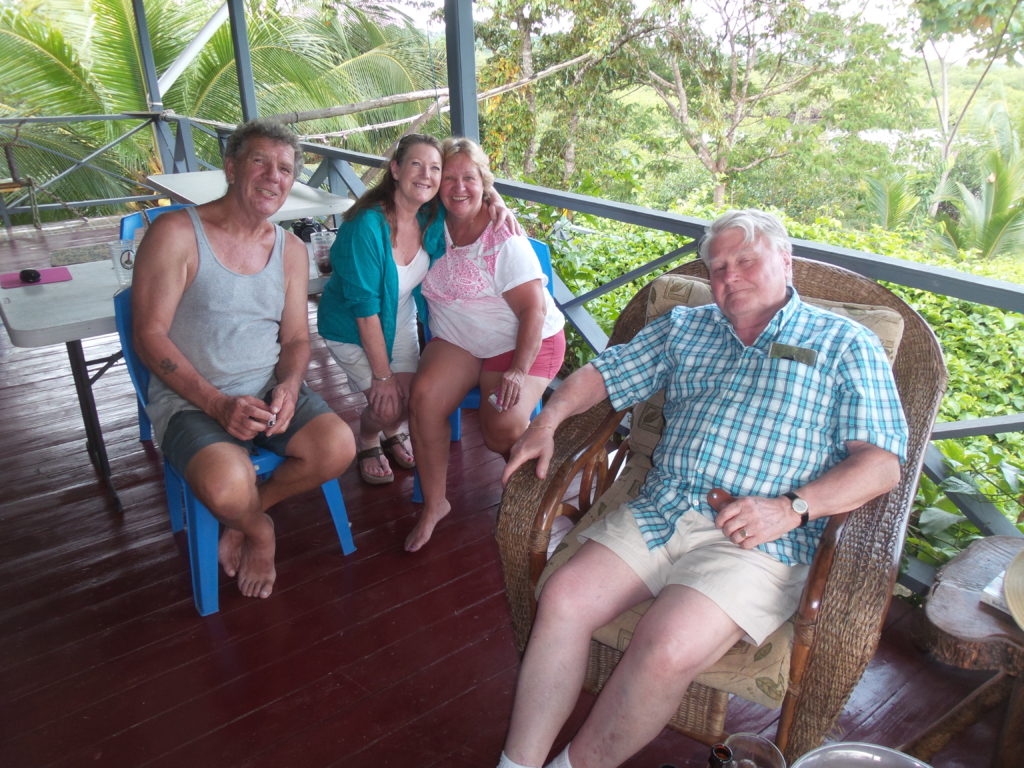 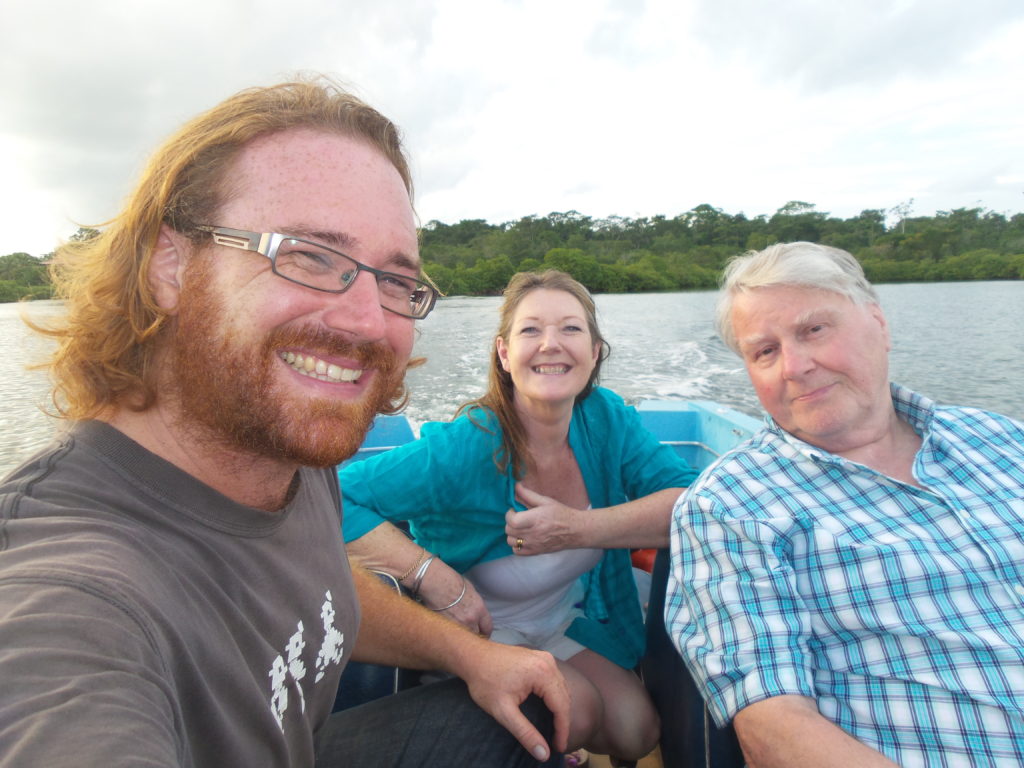 We went to Bocas Town for the weekend, enjoyed a couple of beers at the Rip Tide and afterwards dug into some chili at Gringo’s.

After dad fell asleep around 10pm, mum and I decided to go and have a night out on the tiles… So we went to the Aqua Lounge. Yep. Usually, I’m the oldest person at Aqua Lounge, but tonight I was bringing my mum! We even popped into the notorious Barco Hundido. The last pic in this album was taken at 1:56am. 🤘

If you ever wondered how a ginge like me got so rock an’ roll, I got it from my mum!!

The next day we took the boat to Rana Azul for pizza and beer in the jungle and I introduced my parents to the gang.

Prev
Next
But all good things… my mum had to get back to work and so a few days later it was time to get one last family portrait at the boat dock…
And wave Jinja Island goodbye.
Unfortunately, the flights back to Panama City were sold out, so we got tickets instead from the city of David, 3 hours away. I took mum and dad over to Almirante (the mainland) on the ferry boat and then it was time to say our goodbyes as they were packed into a minibus on the way to David Airport.

And then it was the fast ferry back to Bocas Town for me. Where I found, to my horror, the Rip Tide — my favourite floating bar — had sunk.

I Am, And Always Will Be…