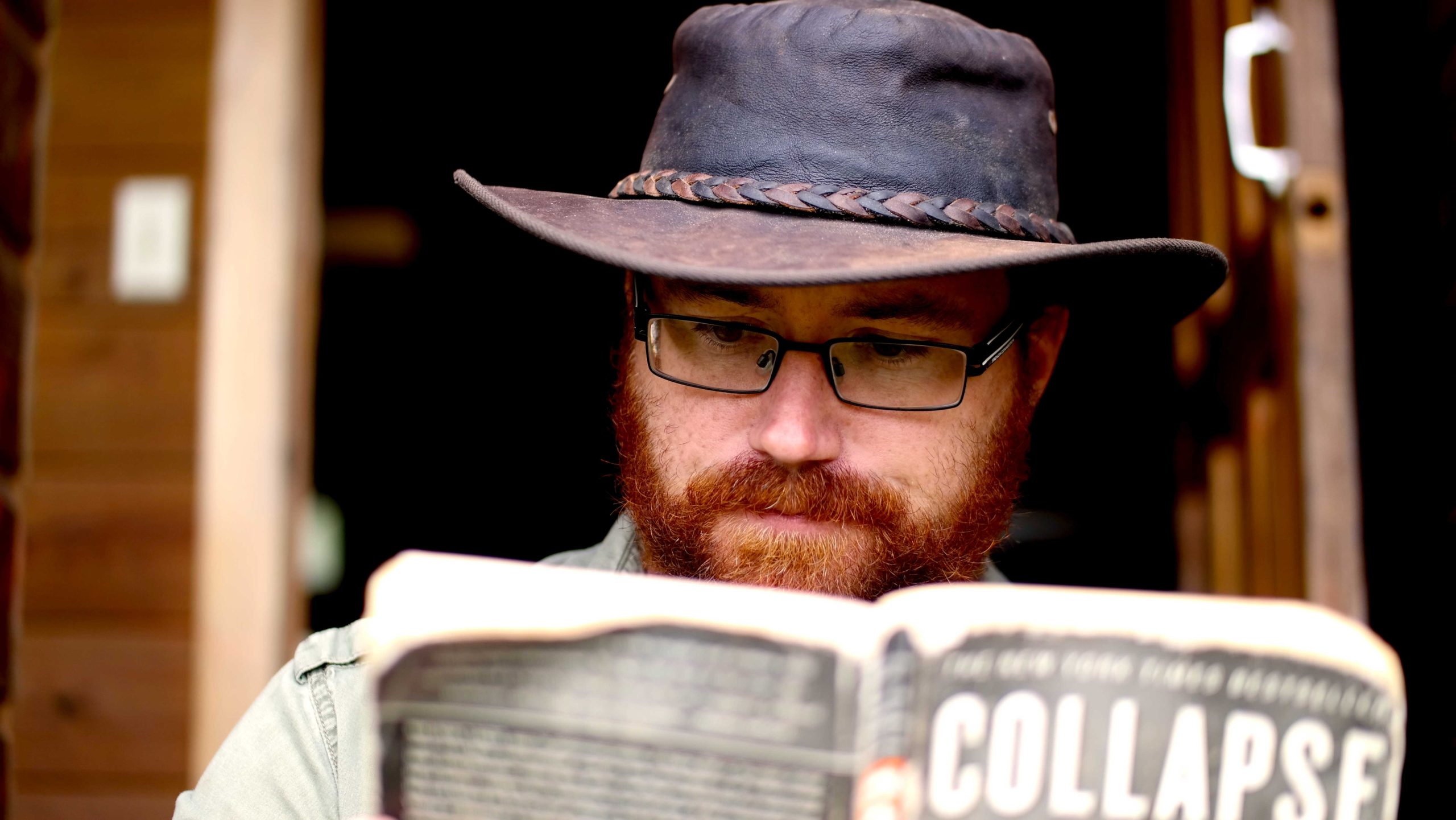 Bit of a wordy post this one, a lot fewer pics than usual. There are two reasons for that: one is that I didn’t take many pictures in November 2016 and the other is that there’s a lot to write about.

First up though, a pic. This is CJ and Jess, my lovely neighbours. They were my rocks during this awful month and it’s a kindness I’ll never forget.

I started the month as per usual: down the boat dock, tapping away on my laptop, finishing off my book. I should possibly mention that last year I also wrote three feature length film scripts. Maybe one day I’ll let you read them.

On Tuesday 8th November, Jess, CJ and I headed over to Bocas to watch the US election together. Over the last few months I had been obsessively refreshing fivethirtyeight.com for reassurance that the tangerine sex-pest, all the “bad eggs” from Willy Wonka’s Chocolate Factory blended into one utterly obnoxious gobshite, won’t become the most powerful person on Earth. But after the Brexit referendum I was (depressingly) convinced he was going to win.

I’m writing this after the election so you might well think I’m full of shit and was as shocked at his “surprise” win as everyone else. Luckily, I have proof of my apparent clairvoyance.

We arrived in town around 5pm, went to The Pub and started drinking. I was aware this would be a long night and I didn’t particularly relish the idea of getting to the end of it sober, whatever happened. By the time the Florida result came in around 9pm that was it. I knew it was over. And by that, I don’t just mean the election, but my life in Bocas.

Josef was right to pack up and head for the hills. Life in Bocas is fun, but it’s tough, you’re living in the jungle and there are a million things that can go wrong. One major thing that helps keep us going is the community we have here, a community that provides a safety-net through the BEN radio network and generally looking out for one another.

Aside from CJ and Jess, I think pretty much every American retiree living on the archipelago voted for Trump. And I can’t escape that fact. In the same way that I think I’ll always struggle to trust anyone who voted for Brexit, how can I trust somebody who has taken a long hard look at the state of our planet, the desperate, urgent need to tackle climate change, and thought “f*** it, the younger generations deserve to suffer”?

They can pretend they don’t see that suffering, they can claim to be unaware, but they’re not children, they know that actions have consequences. And, as horrible as it sounds, people who voted for Trump, people who voted for Brexit, the don’t want peace, justice, honour, love or a brotherhood of man. They just want to see other people hurt. They want to see them struggle. They want their own children and grandchildren to not get the same breaks they had.

And that’s exactly what is happening. In both the UK and US the average life expectancy is going down, murder and violent crime is on the rise. One generation — the Baby Boomers — possess an incredibly disproportionate amount of the planet’s wealth. The progress that had been made since the Berlin Wall came down in November 1989 is being slowly undone. Russia has resurged, not in economic terms, but in its mastery of the geo-political “game”.

The UK and US are being played for saps, but it’s the willingness to be played that gets me, it’s like people enjoy being conned. We have more information than ever before, access to millions of texts, images and videos at the tap of a finger. But instead of using these super-powerful tools to educate ourselves like never before, we’re allowing the same small gang of vile gazillionaires to manipulate our hearts and minds, allowing these gobshites and chancers: Donald Trump, Boris Johnson, Nigel Farage etc to worm their way into our private lives and callously burn bridges between us and our families and friends.

We’re told it’s impolite to discuss religion or politics, so people don’t, as a rule, when you’re all having a great time down the pub. But then Facebook comes along and suddenly people you think you know are posting the most bigoted, hateful crap. If they came out with this stuff in a face-to-face discussion, you might be able to set them right, but instead if you challenge the post, you’ve got this massive braying audience, encircling the conversation and the whole thing descends very quickly into a bear-pit.

Trump’s election (and Brexit) marks the coming together of so many toxic parts of our culture: Facebook, Putin, neo-Nazis, greed, schadenfreude, xenophobia, the YouTube comments section, 4chan, the dark web, troll farms, the move of the disgusting tabloid rags from print to the internet (the Daily Mail site is the most read “news” site on the web), the elevation of individualism over society, a world in which people with the worst start in life are seen as lazy rather than unfortunate, a culture in which criminals are seen as victims (especially when they’re rich), the gaping hole of morality and responsibility left after nobody really believes in the old religions anymore, and the seemingly unquenchable thirst for power by the landed elites, who have now reinvented themselves as “blue-collar billionaires”, like that’s actually a thing.

All this means that notions of fairness, honesty and equality are looked down on as “weak” while millions of hearts are turned to stone by the grubby worship of money and celebrity. If hell existed, a vote for Trump or Brexit would be a one-way ticket to the hot house for the rest of time.

After Trump was projected to win Pennsylvania, CJ and Jess called it a night. I staggered on to The Bookstore where I proceeded to beat my liver more soundly than what Trump had just done to Clinton. People were already saying that it might not be all that bad. I disagreed, I thought it would be worse than anyone could imagine. I studied American politics while at university. I saw “the American system” in practice in dozens of countries around the world. The result was always the same: sooner or later a charismatic career criminal would get into power. They would be afforded the immunity from prosecution that pretty much all presidential democracies confer… while they’re still president.

Thus begins the same old dance seen all over the world: the need of one man (and it’s invariably a man) to cling to power, no matter what. At some point it stops being about wanting to change anything (if it ever was), it’s not even driven by a thirst for power… it becomes a matter of expediency: if they leave office, there’s a good chance they’re going to jail. Or the Hague. An entire nation becomes a self-preservation society for one man.

Meanwhile you have a head of state, government and the military who has no interest in governing. No interest in policy or making good on their election promises (does anyone really believe that Trump is going to get Mexico to pay for his stupid wall or lock Hilary Clinton up?). That might not be such a bad thing, Belgium once went for 589 days without a government, but it presumes there will be no call for leadership in that time; no financial crisis, no terror attacks, no natural disasters to deal with. Chance would be a fine thing.

And so as we head on into the 2020s, that most crucial decade for humankind of the last thousand, it won’t be just America that lacks leadership, it’ll be the world. To the playschool anarchists who consider themselves “libertarians”, claim that tax is theft and that what the world needs now is for everyone to act in their own selfish self-interest I say this: you are wrong and by the time you realise that fact it’ll be too late.

I remember apologising to Nico for kicking the Bookstore’s toilet door. I spent the rest of the evening hunched over in the corner of the bar drinking far too many beers and posting a string of increasingly outrageous expletives onto my Facebook page. I never said I was perfect.

I woke the next day in Crazy Dave’s spare room. He’s a good fella.

I felt utterly despondent, bereft of my usual joy, enthusiasm and optimism. The optimism that had driven me to travel to every goddamn country in the goddamn world. The optimism that had seen me live on a tropical island for the best part of two and a half years. Gone. In the blink of an eye. The song in my heart stolen from me by people for whom this is all a game. People who would no doubt clap with joy to read about another human being being crushed by the weight of the world.

People like Trump, Putin, Farage, Boris Johnson… they just want to watch the world burn. Now they would get their chance to live out their twisted fantasy for real.

I stocked up on supplies, enough to keep me going until the end of the month, and headed back to Jinja.

I was okay, I think, at first. I had Campo and the chickens running about. I had loads of work still to do on my book, which I thought would keep me out of mischief.

But then came the news that Leonard Cohen had died.

It was too much.

I put the Best Of Leonard Cohen on my stereo, full blast, and downed what was left of the Abuelo. I owned a battered old frying pan that I used for making toast. I picked it up and as “Everybody Knows” echoed around the island, I used said frying pan to smash up a standing fan that had been looking at me funny.

“Everybody knows the good guys lost…”

It was marvellously cathartic. I then set to work smashing up a load of other things: plates, cups, a computer keyboard. Once I ran out of things to smash I slumped down on my couch in the pits of desperation and despair.

Soon enough, I passed out. Probably for the best. I woke up the next morning and let Captain Ray know I’d not be doing the BEN weather on the CB radio any more. I’m out.

I cleared up the mess from the night before, nothing I couldn’t fix or replace.

Later that day, CJ came over in her boat to check on me.

For the rest of the month I hung out with CJ and Jess a lot, and generally kept my head down. I was genuinely worried that one of the old Americans who lived in Bocas might come to the island going cray-cray about me trying to take their guns away while swapping out their wife for a transgender abortion doctor in the middle of the night, or whatever fanciful nonsense keeps them awake at night.

The sheer number of incredibly talented people who I respected who have died this year is, quite frankly, insane. It’s off the charts.

I think John Oliver summed up my feelings best…

At The End of All Things

The Skinny on Jinja